Appeal to donate safety gear to cyclists across the country 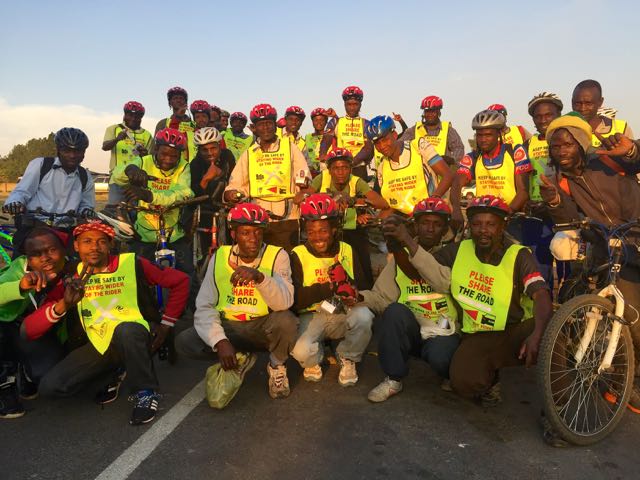 The Diepsloot Cycle Group (DCG) has received a donation of safety equipment to the value of an estimated R15,000.

The group is made up of some 200 riders who choose to cycle to work instead of using expensive public transport. There are some in the group who cycle more than 50 kilometres a day and almost all of them are employed through piece-meal jobs.

When GroundUp first wrote about the group in February, Martin Mathe, the president of the DCG said safety was their chief concern. He said a member of their group had been killed by a speeding taxi on William Nicol Drive and a family had lost a breadwinner.

William Nicol Drive is a highway in Johannesburg that links several suburbs and leads onto the N1 freeway. It is known for its high volumes of automobile traffic.

Responding to Mathe’s plea for donations Pedal Power Association (PPA) stepped up to offer some support.

Chief Executive Officer of the organisation Robert Vogel said they had enough funds to outfit 25 riders with helmets, reflector bibs and front and rear lights for each bike. The handover was made on Wednesday, along a grassy area on William Nicol Drive where the cyclists often convene to ride home together.

“The handout was great. Martin brought along 24 riders from his group as requested, but while I was handing out the items to them, more and more cyclists dropped in to see what was going on,” said Vogel. “I left there with a list of 68 names, all asking for the reflective bibs, helmets and lights.”

Vogel said lights cost R200 per pair. “The front light can be recharged and functions as a torch as well.”

The DCG organises itself so that groups of cyclists depart the township together. This often means leaving before the crack of dawn and returning well after sunset.

Vogel said the Road Accident Fund had recently funded his organisation with R200,000 to produce and distribute reflector bibs to cyclists across the country. A portion of those bibs went to the DCG.

“Based on the demand I saw yesterday, there is a great need for items that make the cyclist’s commute safer,” said Vogel.

He challenged other cycle organisations, retail shops and repair centres to assist them and ensure that other commuter cyclist groups, like the DCG, could also receive help.

“I would like to put out an appeal to all the bike shops, cycling clubs and individuals to donate unwanted, but not broken, helmets … at designated drop-off points. We will then collect the helmets and give them away.” He says helmets will be distributed in the areas where they are collected.

He also urged those in a position to do so, to purchase the items and distribute it to those cyclists they pass on the roads on a daily basis

“The basic lights cost R80 for two at your local bike shop. That’s all it costs to make a cyclist more visible.”

Meanwhile Mathe told GroundUp that he was very grateful for the donation from Pedal Power. He said there were still others in the group who required assistance.