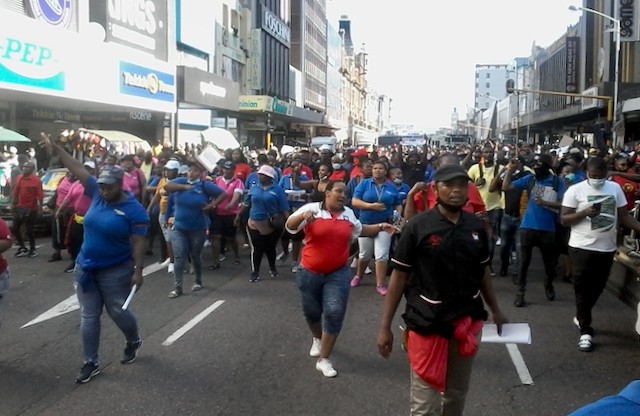 Workers under the banner of South African Commercial, Catering and Allied Workers Union (SACCAWU) went on strike in Durban on Thursday.

The strike was triggered by store closures and retrenchments at Massmart (which owns Game, Makro, Jumbo and Builders Warehouse).

In February, the company issued a section 189 notice affecting about a 100 workers.

On Thursday, hundreds of SACCAWU members marched to the Game Store in Dr Pixley Ka Seme. After that, they proceeded to the Durban City Hall, where they were addressed by union leaders. The workers gave the company seven days to respond to their memorandum.

Workers complained about working conditions, retrenchments, reduced working hours, demotion of workers and “mapping” (reassigning people according to their qualifications).

Workers, who wished to stay anonymous, said hours have been reduced from 195 to 120 per month for some workers.

SACCAWU Regional Secretary Mphikeleli Ndlovu said the closure of some stores, including Game at the City View Shopping Centre in Durban, without consulting the union led to the industrial action.

“Mapping has caused a lot of problems … Why are workers being asked to provide their qualifications now after working for the company for so many years? What makes them unqualified if they have been doing the same job for years?” asked Ndlovu.

Massmart senior vice-president of corporate affairs Brian Leroni said the specific detail of the dispute is vague and appears to relate to historical matters that have been settled after extensive consultation with the SACCAWU leadership.

Leroni said, “The union’s action is not fully understood or supported by many participating employees.” He said there were “indifferent levels of participation in stores across the group” and “our stores are operating normally”.

Leroni confirmed a reduction in operating shifts at distribution centres. He said this was to preserve jobs rather than cut jobs.

On the closure of the City View Game store he said, “Employees at the store participated in a Section 189 process that included extensive consultation, that is soon to be concluded and that will potentially result in re-deployment to other stores or voluntary severance depending on individual preference.”

“We are however deeply concerned by the arbitrary nature of the current industrial action in the context of the current economic environment,” said Leroni.