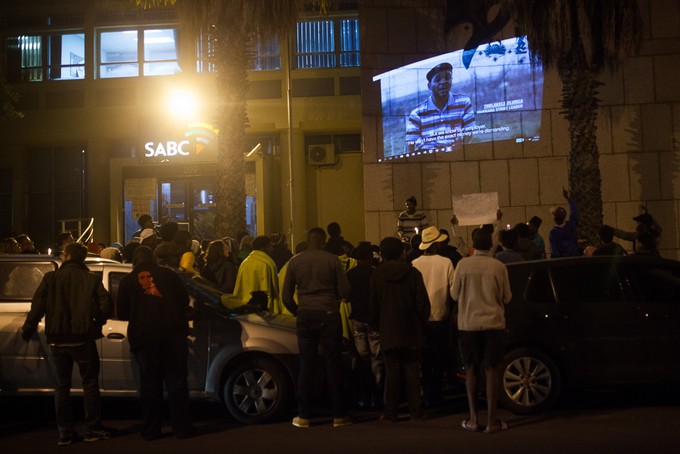 The documentary Miners Shot Down was projected onto the wall of the SABC building in Sea Point last night.

About 70 protesters gathered outside the SABC offices in Sea Point for a public screening of Rehad Desai’s documentary, Miners Shot Down, last night. They were commemorating the killing of 47 people killed in the Marikana area in 2012, and in particular the 34 gunned down by police on 16 August of that year.

Organised by the Right2Know Campaign, the film was projected onto the wall of the SABC building without permission from the state network, as a form of protest. The public broadcaster has received negative publicity for not screening it.

“If they don’t want to screen it, then we will screen it on their walls and we will just break that silence for them,” said Vainola Makan, Right2Know’s Western Cape organiser. The SABC are tolerating interference from government says Makan.

Directed by Rehad Desai, the film won Best Documentary at the International Emmy Awards in 2015.

Protesters demanded that the SABC show the film and that COO Hlaudi Motsoeneng must go. They chanted: “No more secrets”. Each miner’s name was spoken out individually as the film displayed silently on the walls of the SABC.