SA firefighters in Canada: here are the facts 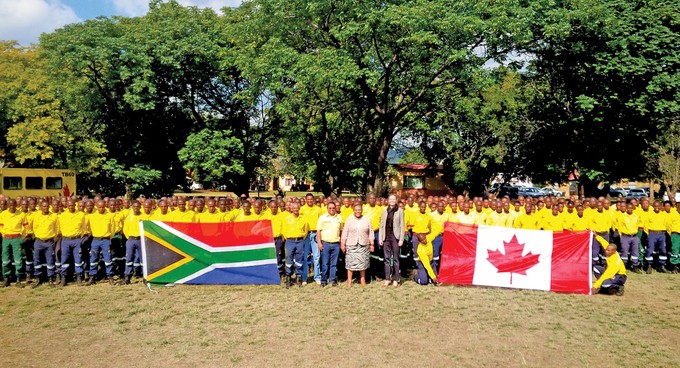 About 300 South African firefighters have been involved in a pay dispute in Canada. Photo: Working on Fire website

The firefighters were brought to Alberta, a province of Canada, to fight what is known as the Fort McMurray blaze, which had been spiraling out of control late May.

The contract was negotiated by the Canadian Interagency Forest Fire Center (CIFFC) and Working on Fire, a South African government program. As a result of the contract, the provincial government in Alberta agreed to pay $170 Canadian dollars per firefighter per day to the program (all dollar amounts in this article are Canadian - it is about R12 to $1).

The firefighters were profiled in the news especially for their singing upon arrival at the airport in Edmonton, Alberta.

The firefighters had ceased working last Wednesday. According to most news reports this followed them hearing reports from South African news sources claiming they were making $15 to $21 an hour. But according to the Canadian Broadcasting Corporation (CBC), the firefighters were being paid $50 per 12-hour workday, a little more than $4 an hour.

The minimum wage in Alberta is $11.20 an hour. However the $50 was classified as a stipend, meaning it is not subject to Alberta’s minimum wage laws. The $170 is meant to cover the stipend, regular South African pay of the firefighters, and operational expenses of the program. As the average pay of a South African firefighter is R85 or $7 a day, an estimated $112 per firefighter per day would be going to the operational expenses. Overall, the program would be gaining R2.8 million each week for those “operational expenses”. Additionally, officials in Alberta confirmed that they were providing lodging, equipment, and meals to all crews.

To further complicate matters, Working on Fire is only providing $15 of the daily stipend immediately. Under the contract, it promised that the remainder of wages would be paid within six months of return to South Africa. Some of the firefighters indicated that they had not been paid the remainder in similar previous arrangements.

Last Wednesday, on the fifth day of their 14 day work-cycle in Canada, the firefighters went on strike, indicating displeasure with the overall amount and staggered nature of the payments. Working on Fire sent a management team to try and settle the dispute, but finally decided to pull out all the firefighters on Sunday evening.

CBC reported that Alberta Premier Rachel Notley found it unacceptable that the contract did not appear to provide for a fair and equitable wage. She believed that the firefighters should have been paid the minimum wage of $11.20/hour. She ensured future agreements would comply with the province’s labour laws.

This is not the first time that South African firefighters have been sent to Canada. Last year, two crews were sent to combat fires in British Columbia and Alberta, through similar agreements between the CIFFC and Working on Fire. After their deployment, the CIFFC had released a Crew Performance Report praising the South African crew on their fitness, work ethic, and morale. While there were no complaints from the South African firefighters regarding their pay, Canadian officials had expressed concern at the lack of wage parity. As a result, CIFFC had increased the overall compensation to Working on Fire, believing that it would translate into more money to the firefighters themselves.

It is unclear how much Working on Fire and Kishigu Holdings spend on administrative and training costs. Working on Fire has released a statement saying “We always agree on remuneration with our firefighters when going on deployments of this nature and, as in this instance, formal contracts were signed… We are extremely disappointed that we couldn’t resolve this internally before it escalated to become an international incident.”

The firefighters are expected to return to South Africa on Tuesday. It is unclear if they will face disciplinary action from Working on Fire for their roles in the strike, or what they are going to be paid for their time spent in Canada.