By Nombulelo Damba-Hendrik and Daniel Steyn 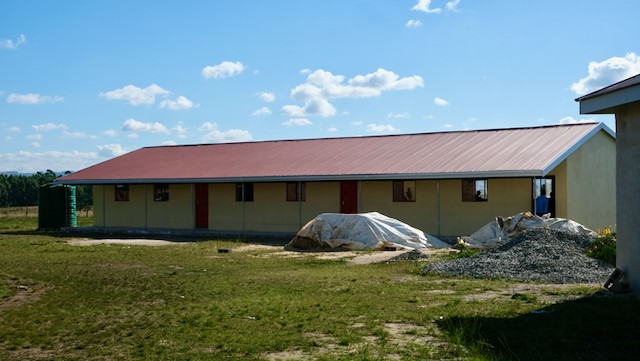 The School Governing Body of Baleni Senior Secondary School near Xolobeni is using its limited funding to build new facilities without the assistance of the Department of Education. Photo: Daniel Steyn

Tired of waiting for the Eastern Cape Department of Education, parents of learners at Baleni Senior Secondary School near Xolobeni are raising funds to build more classrooms.

Parents have already built a staff room and four classrooms to accommodate a rapid increase in enrolment. They need more funds to add a new school hall and toilets.

The school has 986 learners in grades 8 to 12. Some classes have more than 70 learners.

The school was originally built in 1977. The floors in the old classrooms are made of wood and have collapsed in some places. Students and teachers have fallen through and been injured.

Deputy principal Thembi Makatisa said she fell through the floor herself one day while she was teaching and students had to help pull her out.

Teacher Langa Sakwe said she saw fear on the faces of the learners when they had to pull her out after she also fell through the floor. “Last week when a learner got injured, the principal had to drop everything and rush the learner to hospital,” said Sakwe.

In 2015 parents from the school went to the education department offices in King William’s Town, but they say they left with empty promises.

School governing body (SGB) chairperson from 2002 to 2019, Princess Gqwarhu, said parents had written a number of times to the department. “Every year when we send a letter their response will be sending officials to survey the school, then nothing will happen,” she said.

Equal Education (EE) representatives visited Baleni in March 2019 as part of a school infrastructure monitoring exercise in the district. EE Eastern Cape Researcher Elizabeth Biney said the province has one of the worst school infrastructure backlogs in the country. They found Baleni Senior Secondary in poor condition and not compliant with the Norms and Standards for Public School Infrastructure.

Classrooms are overcrowded, the ceilings and floors pose a serious danger, and there is no electricity or tap water. Solar panels installed as part of an education department project were never serviced and no longer work. As a result, computers donated to the school cannot be used. The toilets are pit latrines. Seven male teachers share one pit toilet.

Biney said an online presentation to the Eastern Cape Provincial Legislature Portfolio Committee on Education in May 2021 revealed there are still 1,076 schools in the province made of inappropriate material, and 3,157 schools requiring sanitation intervention of which 1,598 only have pit latrines or unacceptable sanitation.

Biney said since the launch of the Accelerated Schools Infrastructure Delivery Initiative (ASIDI) in 2011, only 266 schools made of inappropriate materials had been replaced, sanitation had been improved at 886 schools, and 372 schools had been provided with electricity.

Similarly, since 2011 only 686 schools have benefitted from the Sanitation Appropriate for Education (SAFE) initiative.

“Moreover, the 2021 National Education Infrastructure Management System (NEIMS) report shows that 90 schools in the province still have no electricity supply, while 2,621 schools have an unreliable water supply.”

“This is only what we know from the fragmented information obtained from national data and departmental reports and responses. However, since information on school infrastructure in the province is not publicly and readily available, the situation could be worse,” said Biney.

Eastern Cape education department spokesperson Malibongwe Mtima said Baleni SSS is on the SAFE Program in an evaluation stage. He said about R200,000 was allocated for school maintenance in 2021/22.

“The school through the District office has been encouraged to use the maintenance budget for maintenance and repairs,” he said.