“It has never been bad like this” says Motherwell resident 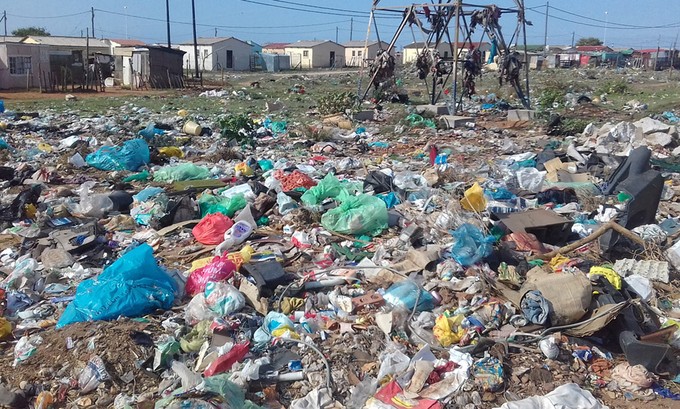 Residents of Motherwell in Port Elizabeth have expressed anger at the Nelson Mandela Bay Municipality for failing to collect rubbish regularly. They claim the dump sites were last cleared in early December.

The dump sites mostly located alongside streets are overwhelmed with garbage. Residents described how they fear for the health of their children who play in the garbage because they don’t have parks.

The worst affected areas are NU8 and the informal settlements of Powerline and Endlovini.

Headman Janjies, 57, of Powerline informal settlement complained that the overflowing rubbish near his shack is attracting rodents and flies. “I have been living here for more than 20 years but it has never been bad like this.The place is covered with rotten garbage. The smell that comes from here is so heavy that some of the shack owners no longer live indoors. The municipality last collected rubbish in December.”

Janjies said that residents of his area did not enjoy their festive holiday as they had to stay indoors, avoiding the filthy environment.

Damara Kano, 48, who lives in NU8, described how he now avoids the shortest route to the shops because rubbish is everywhere. Instead he and others now take a longer more dangerous route. “People are dumping everything there.They throw away dead dogs and cats.The smell is very heavy that we live indoors all the time. Our windows are always shut to prevent the flies and mosquitoes that come from the strewn rubbish. We are paying our monthly municipality rates but the municipality is not bringing better services to the people.”

Kano accused the municipality of being quick to enforce by-laws on defaulting residents but it was not doing its job perfectly. “We are fed up with protesting against the municipality. We had high hopes for this new DA-led municipal leadership but it seems our hopes are in vain.”

He described how residents make fires to burn rubbish. “The smoke often covers most of our houses, polluting the air that we breathe. We have been complaining about this miserable situation but our pleas have been falling on deaf ears.”

Ward 57 councillor, Becinga Mbuqu (ANC) said: “I have been putting pressure since November for the municipality to collect the rubbish not only from the Powerline area, but from other areas in my ward that are facing the same situation. Just in December I submitted a list of the affected areas to the municipality sub-office in Motherwell. The official told me that they were busy clearing rubbish in other areas. The same official pointed out that there was a shortage of refuse trucks. I was assured that they would collect the rubbish soon.”

Municipality spokesperson, Mthubanzi Mniki, wrote in a Whatsapp response on Tuesday that, “Officials will visit the site tomorrow morning to check the problem. However it is encouraged that residents stop dumping illegally as this affects the wellbeing of others, more especially the children.”

GroundUp went to check the dumping sites on Thursday afternoon and found the situation worsening with children playing in one of them.