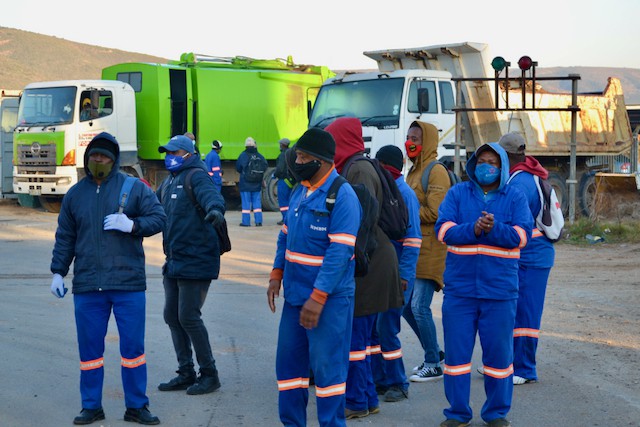 About 30 garbage collectors at the Cuyler Depot in Kariega stopped rubbish collection for the second day on Friday morning.

Municipal spokesperson Mthubanzi Mniki said the employees contracts had ended. He said due to budget constraints the department could only afford to take a smaller number of employees.

At 6am on Thursday and on Friday, when rubbish trucks were supposed to have set out for the streets of KwaNobuhle, Khayelitsha and the city centre, the workers closed the main gate and told truck drivers not to drive out of the depot. Vehicles were also barred from entering.

Workers did not want to be named, fearing they would be denied permanent jobs if identified.

“We have been badly treated … The management has told us they won’t employ us permanently,” said a worker.

He said tensions rose in June when they demanded overalls and personal protective equipment. “We told them Covid-19 is affecting all of us as human beings, irrespective of whether you are a full-time worker or not.”

“We discovered that in all the other five depots in the city other casual workers will be made permanent in this financial year, except us,” he said.

Meanwhile garbage was not collected in KwaNobuhle on Thursday, and the whole of Khayelitsha had rubbish bins lining the streets on Friday.