300 shacks demolished but occupiers say they are not leaving 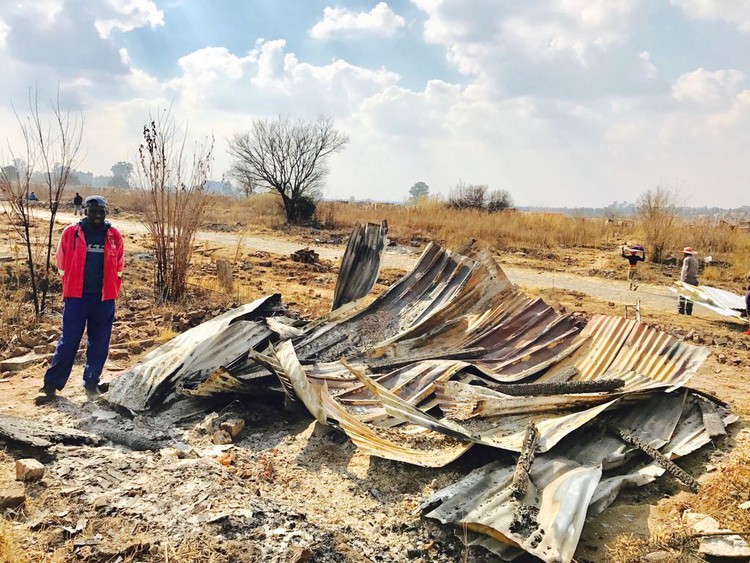 Nathal Basemlambeli stands next to his demolished shack in Old Brakpan township after police removed 300 shacks from the area on Tuesday. Photo: Kimberly Mutandiro.

Land occupiers in the Old Brakpan township were awoken by rubber bullets hitting the doors of their newly built shacks on Tuesday morning as Metro Police evicted the occupiers and demolished 300 shacks.

According to Metro Police only occupants who had lived in the informal settlement for more than a year could stay because their case was still pending in court.

“All the new occupants who had come to the land three weeks ago under EFF registrations had to leave,” said Ekhurhuleni Metro Police Spokesperson, Wilfred Kgasago.

Infuriated EFF members and occupiers said they are not leaving the piece of land, “no matter what”.

Sleeping in her new shack with her three-month-old baby, Nosipho Khumalo, said she had woken up thinking someone was knocking on the door. She opened the door to find Metro Police. They demanding she leave the shack immediately. Standing outside holding her baby she watched as her shack got demolished. Everything was taken away.

Nguthuki Sibanda, 19, says he was waiting to help his mother build their shack when rubber bullets hit him. Bleeding spots were visible on his legs, body and arms. He screamed in pain.

“l do not understand why l was shot. l was only standing. l did not do anything wrong,” he said. He said the building material he had been waiting to work on was taken away by Metro Police. He was later taken to Far Eastrand hospital for treatment.

EFF members claimed that Metro Police had also come on Monday and fired both rubber and live bullets at the land occupiers.

“We only fired rubber bullets in an attempt to get them off that land because they are occupying it unlawfully,” said Kgasago. “We are only enforcing the law working with the municipality to remove them. We managed to remove 300 shacks in total.”

Mmouluki Matsemela said he was born in the Old Brakpan township in 1965 before they were removed. He said the Metro Police’s actions made him feel like he was being removed from his home for the second time.

“They chased us away from here between 1980-81. They never compensated us. They should let us take our land back,” he says.

Sesi Ndlovu, EFF chairperson for ward 97 in Brakpan, said it was unconstitutional for the Metro Police to remove the new land occupiers. “Our Constitution states that everyone has a right to a place to live. All these people here have no place to live. They have come back to the land of their ancestors and Metro Police are shooting them. The government is failing us.”

EFF members in charge told everyone not to leave because they had everything under control. “We have already taken this land back. It is ours,” said Ndlovu.