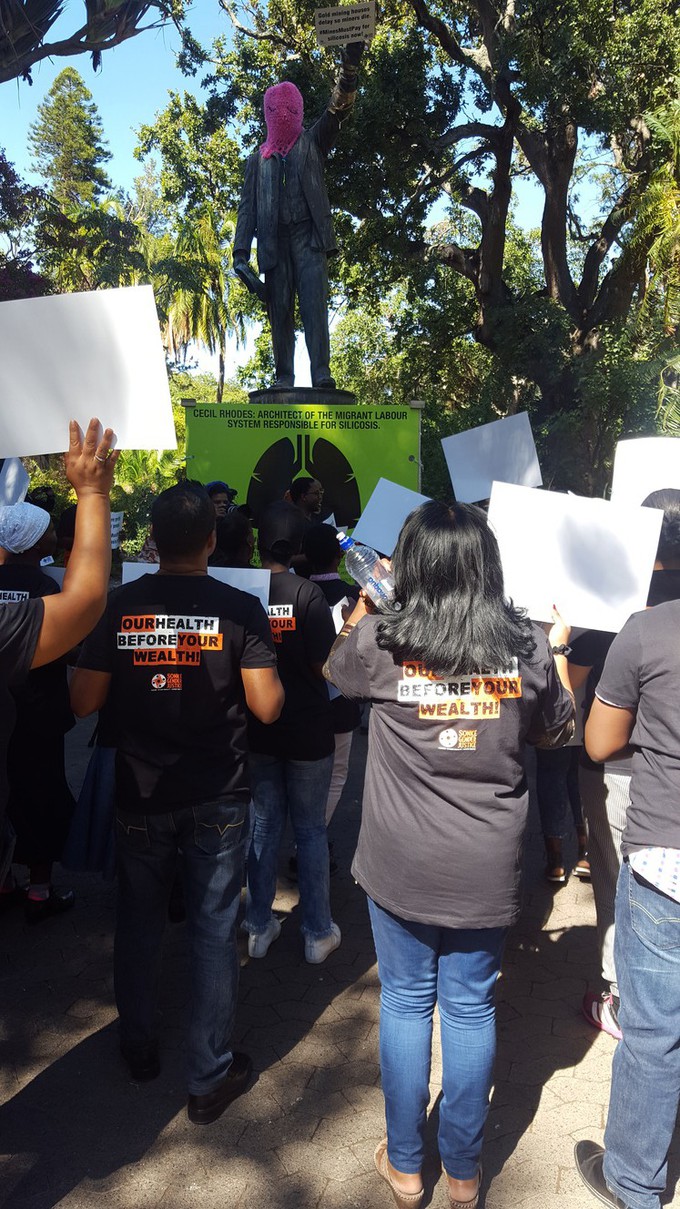 The Rhodes statue in the Company’s Garden was covered with posters today during a protest against the gold mines. Photo: Mary-Anne Gontsana

His head and face completely masked in a makeshift balaclava, the statue of Cecil John Rhodes in the Company’s Garden in Cape Town, was decorated today with a poster reading “Cecil Rhodes: architect of the migrant labour system responsible for silicosis.”

This was part of an event organised by activist organisation Sonke Gender Justice, calling on the gold mining industry to acknowledge its role in the epidemic of silicosis caused by dust and demanding that mines compensate miners who fell ill while working in the mines.

According to Sonke, Cecil Rhodes was the earliest architect of the migrant labour system and the author of the 1894 Glen Grey Act, which forced black men to leave their rural homes and find work on the mines.

Former mineworker Tseliso Thulo, who suffers from silicosis, worked at a mine in Welkom from 1971 to 2009. “We worked under terrible conditions and we had no protective gear like masks to cover our mouths and noses, so we inhaled the most terrible dust. During explosions, we also breathed in that dust and we were not given any alternative. We used to be told by our employer that we had two options, work under these conditions or go home and not come back,” he said.

Coughing as he spoke to GroundUp, Thulo said: “I started having a terrible cough nonstop and it felt like my chest was blocked. I saw a doctor and was given medication, but it didn’t help. I went to numerous doctors in fact, because I was not getting better, and one of them said I had TB.”

He said the mine refused the private doctor’s note because it did not come from one of the mine’s own doctors.

By 2006 his health had deteriorated to the point where it affected his work. He started seeing the mine doctor and in 2009 he was diagnosed with silicosis. He was told to stop working and received a sum of R20,000 from the mine. He says he has received nothing since in spite of promises by mine management.

The protest coincided with the last day of the three-day Mining Indaba held in Cape Town, Protesters carried placards with the words “No more profits over people” and “Exploited, damaged, discarded”.

The statue of Rhodes was covered with a collage of faces of miners with TB and silicosis and posters with information about silicosis and Rhodes.

In May 2016, the South Gauteng High Court issued a landmark judgment providing that miners and the dependents of deceased miners (widows and children) could go ahead with a silicosis class action lawsuit against the gold mining industry. The Supreme Court of Appeal has granted the mines leave to appeal against this judgment.