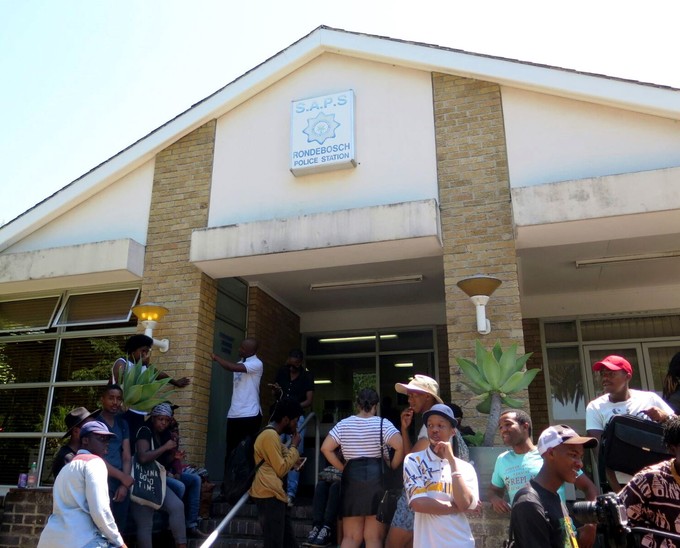 Rhodes Must Fall members wait outside the Rondebosch Police Station where some of their members laid charges against the university. Photo: Ashleigh Furlong

Students from the Rhodes Must Fall movement laid charges against the University of Cape Town (UCT) today. They cited Vice-Chancellor Max Price and others in their complaint. The charges include malicious damage to property, assault with intent to do grievous bodily harm and unlawful eviction.

This was according to Rhodes Must Fall member Simon Rakei, who spoke outside the Rondebosch Police Station this afternoon after laying charges.

He said that a charge of intimidation by private security and police may also be added and that at least six people are laying charges.

“There will be probably be eight statements [from different students] by the end of the day,” he said.

The charges come after Rhodes Must Fall convened a media conference at Rhodes Memorial earlier today.

Cathy Phukubje read out a statement describing the events of Tuesday evening from the Rhodes Must Fall perspective. She said it “culminated in levels of police violence at UCT unprecedented since 1994”.

She said “many had not eaten the entire day and it was decided that the masses would peacefully enter Fuller Hall for dinner”.

About 30 people participated in today’s Rhodes Must Fall event.

After dinner, Phukubje said that students removed images from the walls that upheld “the legacy of colonialism” and burnt them, while they “celebrated and sang around the fire”.

She said that after private security came to remove the movement’s ‘shackville’ structure, they pursued students and beat them.

Rhodes Must Fall did not claim responsibility for the burning of a car on upper campus nor the petrol bombing of Price’s office, saying that this was done by “unknown individuals”.

She said that the framing of the night as violent on the part of students, as well as the university management saying it respects the right to protest, but only when the protests are nonviolent, was part of “a particular colonial mythology which hides present structural violence”.

“The burning of colonial artefacts of white heritage is seen as a violent act, while the psychological violence these inflict on black bodies at the university is never considered,” she said.

When asked about the burning of a black protest artist’s work, Simon Rakei said, “It is hypocritical of media and white people to use the one black artist to lambast and to completely ignore discussions of decolonisation and whiteness.”

By the time the charges were laid most of the protesters outside the police station had dispersed.

Price, his deputy, Francis Petersen, and Executive Director of Development and Alumni, Russell Ally, were specifically mentioned in the charges.

About 30 people participated in today’s action.