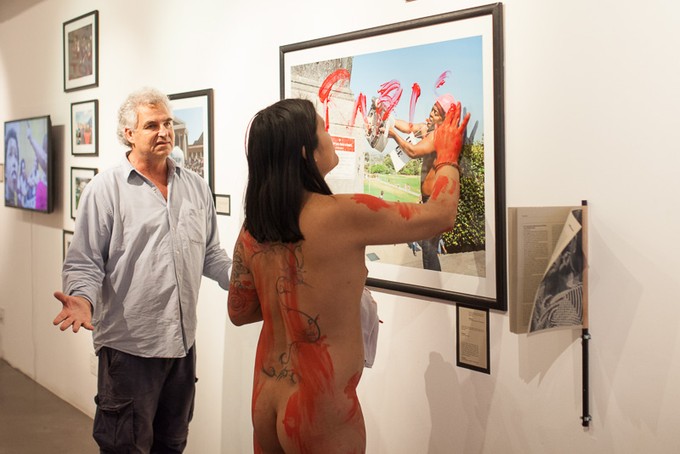 Curator of the Centre for African Studies Gallery Paul Weinberg asks a member of the Trans Collective to stop the disruption. Photo: Ashraf Hendricks

Students smeared photographs with red paint and blocked the entrances to the Centre for African Studies Gallery with their painted naked bodies. The exhibition was shut down.

“We will not have our bodies, faces, names, and voices used as bait for public applause” was printed on a pink piece of paper plastered over one of the photographs in the exhibition. Another sheet read: “RMF [Rhodes Must Fall] will not tokenise our presence as if they ever treasured us as part of their movement”.

“Rhodes Must Fall is a dynamic movement with a very difficult story to tell. At the same time we cannot police people and the way they express themselves,” said Wandile Kasibe, the Rhodes Must Fall Curator of the exhibition. “For me, I think people should be given the opportunity to see the exhibition and make their own decisions.”

Whether the exhibition will be reinstated is still under discussion, as certain photographs have been removed, while others have been covered in red paint.

In a statement released a short while ago, the Trans Collective stated that its “role has now evolved into speaking back to RMF and keeping it accountable to its commitment to intersectionality precisely because it is positioned as a black decolonial space.”

Trans Collective complained that only three out of more than 1,000 images that ended up making it onto the exhibition roll featured a trans person’s face.