Retreat’s backyarders are desperate for housing

But City says no new developments earmarked for the area 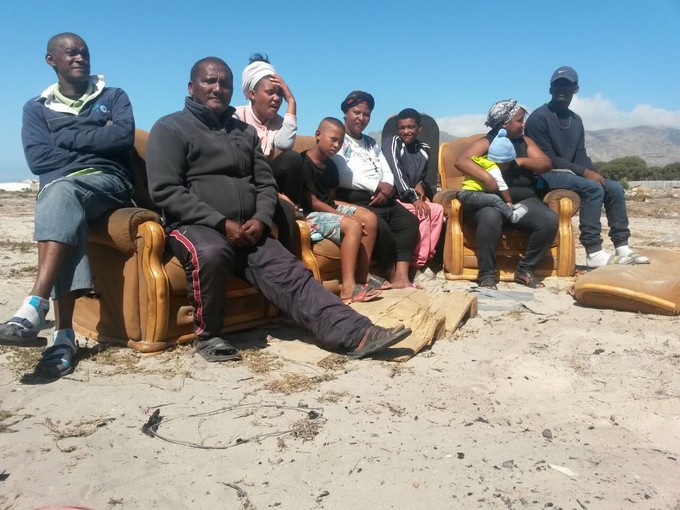 Some of the residents who have been erecting shacks on an open field in Retreat. Photo: Barbara Maregele

Retreat resident Bronwen Rhode, 55, and her husband share their two-bedroom council house with 18 other family members from five generations. They have been living in their 11th Avenue home for as long as she can remember.

“My children are married now and have their own families, but they can’t afford to buy their own houses. I know it’s not healthy to live like this, but where must they go?” she asked.

Rhode pointed to a mattress in the small lounge. “This is where my son, his wife and their child sleep at night. My daughter-in-law’s mother sleeps on the couch here as well, because she has nowhere to stay.”

“The rest share the beds in the room or we make a sleeping place for the children on the floor. My other son and his wife also live in a wendy house at the back,” she said.

Rhode lives in a council house with 19 family members.

Two toddlers were in the narrow passage in the house.”I’m a sickly woman,” she said. “It’s unhealthy to live on top of each other like this.”

Rhode’s family is one of about 30 families who have been erecting shacks since Sunday on an open field on 10th Avenue, Crestway, Retreat. Every time, the structures are demolished by the City of Cape Town’s anti-land invasion unit with the assistance of police and law enforcement.

Residents tried blockading the road by burning rubbish and tyres.

“When there were more than 30 shacks and wendy houses set up on Sunday, an army of police and law enforcement showed up. They started breaking down the structures without any warning. We tried to stop them so we could get our stuff, but they didn’t listen to us,” she said.

“One guy was pulled [out] by a law enforcement officer and arrested. Some people were tear-gassed, including a pregnant lady and her toddler. Some of the people here have nothing left,” she said.

The group of mostly young backyard dwellers say they will continue rebuilding on the land until the City provides more housing in the area. Some backyarders said they paid as much as R2,000 a month for rent, which excluded additional payments for water and electricity.

Rhode said the field was a known crime hotspot and having people live on the land would change that.

“So much has happened on this field. Babies are dumped, children are robbed. Those things won’t happen if this field is occupied. Why can’t we just stay here? It will make this field safer,” she said.

But the City’s Mayoral Committee Member for Human Settlements, Benedicta van Minnen, said there are no new developments earmarked for the land.

“We heard that the City was offering subsidies for houses, but my children don’t qualify because they haven’t been on the housing list for a long time,” said Rhode.

Howard Soetwater, who represents the Homeless People Organisation, said that during a recent meeting with the local councillor, it was agreed that a new housing project would be allocated to the community to alleviate the issues around housing.

“The backyard dwellers have been meeting with the council for the past two years. At the moment, it’s like they playing cat and mouse. We sent letters and called and got no response. The community got fed up and the people decided to move onto the field,” he said.

“The City needs to get a court order to get us off the land. Most of us are unemployed or just do odd jobs. We couldn’t afford high rent any more,” he said.

According to Van Minnen, the group have been victims of a housing scam by “an instigator” who allegedly promised to secure them houses at a R50 fee.

“Every single piece of land that is invaded becomes a fire risk; basic service delivery suffers; and the City’s resources are stretched to the limit in an effort to provide basic services to another settlement,” said Van Minnen.

She said the City was also informed that various people in desperate need of housing, have been enquiring about the hoax developments in the area.

“The community must remember that beneficiaries of social housing projects don’t have to pay,” she said.