For months Uitenhage residents have had infrequent garbage collection 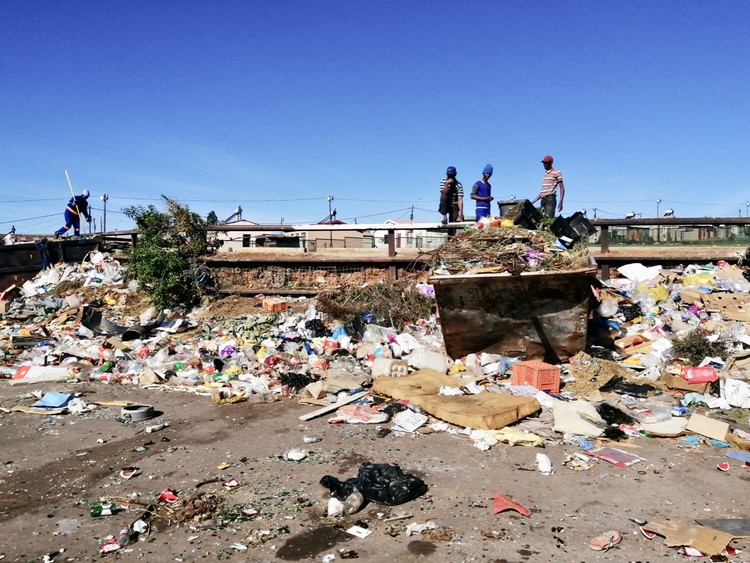 Residents of Khayelitsha, Uitenhage, say they have had to resort to illegal dumping because of a lack of regular refuse collection by the municipality in ward 42. The problem has been ongoing for months.

Nceba Sowasi, a 60-year-old resident, told GroundUp: “The municipal workers are supposed to collect rubbish every week on Wednesdays.” But, he says, for three months, they have been collecting rubbish once or twice a month.

“Nobody likes dirt in the yard. Nobody can tolerate this nonsense. And as long as they fail to collect rubbish weekly, we will keep dumping it,” said Sowasi.

In early April, GroundUp reported the same problem in ward 47.

At a drop-off centre meant for garden refuse and household junk two skips were placed at the site a year ago, according to a municipal worker. They have been overflowing with rubbish. The municipality added a third skip last week — which was filled within the day — but did not remove or clear out the old skips.

Residents are now dumping all their uncollected garbage at this site. On Friday afternoon, children were playing in a park and outdoor gym next to the dump, where bottles, baby napkins, old clothes, used condoms, rotting food, tyres, mattresses, and crates were strewn about.

“Rats are also the order of the day in this dump site,” said resident Phumla Mayo. “When these children play, they often breath stinking litter.”

Lukhanyo Dyantyi was pushing a wheelie bin to the site. “It is not easy for our parents to tolerate seeing rubbish in their yards. So often they send us here,” he said. “Those who can’t walk to dump stinking rubbish at this site, such as the disabled and elderly people, are taken advantage of … People charge them R5 to push their bins.”

Ward Councillor Phakamisa Mfama (ANC) said, “We are monitoring the situation and are busy engaging with waste management to help us keep our ward clean.”

Nelson Mandela Bay Municipality spokesperson Mthubanzi Mniki said: “We request residents to keep their refuse while waiting for the trucks. The municipality is working on purchasing new trucks to augment the existing fleet.”