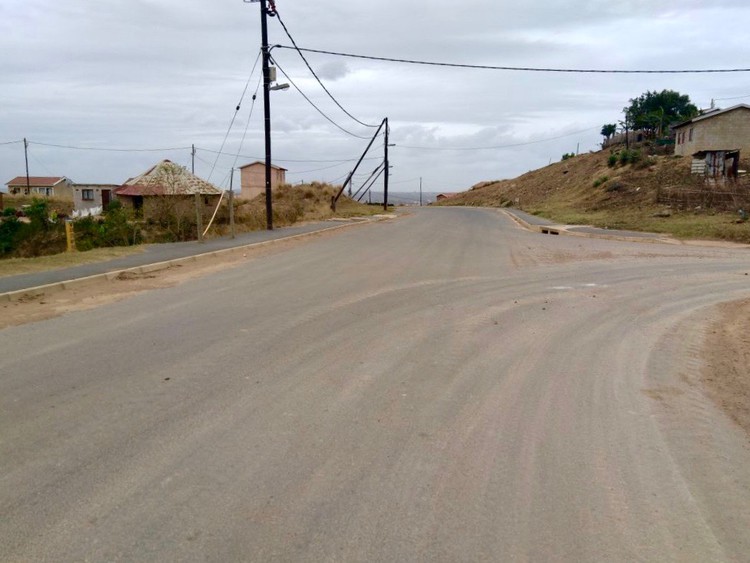 Residents of Amaoti say they will destroy Angola Road if they are not compensated for the demolition of their homes in 2013. Photo: Nokulunga Majola

Residents of Amaoti, north of Durban, are threatening to destroy a new road if they are not compensated for being relocated. About 35 people had their homes, some of them with up to six rooms, demolished to make way for Angola Road in 2013.

Some of the people were relocated to RDP homes; others are now living in shacks. They were supposed to be compensated according to the value of their houses, but five years later nothing has happened.

The roadworks have also stopped as more demolitions will be necessary. Ward councillor Bongani Qantsi said, “Once we have established how many more people will be affected we will then work out how they will be compensated, together with the first people whose houses were destroyed in 2013. This issue is being handled.”

But resident Sibekezele Mthembu said, “How long should we wait for what belongs to us? [eThekwini Mayor Zandile] Gumede came to us and told us that a new road will be built in the area. She said, for that to happen our homes would have to be destroyed, but we will be compensated so that we can rebuild somewhere else.”

“These are our homes that we are talking about. Why is it taking them so long to pay us what is due?” asked Mthembu. “I don’t know how many meetings we have attended over the years, but nothing concrete has come of it.”

“If nothing is done soon to resolve this matter, we will resolve it ourselves by doing something the City will not approve of,” said Mthembu.

Resident are now threatening to destroy the road, anything built along it, and the mayor’s house. They blame her for the delay.

Resident Jabulani Sosibo said, “All we are getting are empty promises. We have been patient for far too long. All we want is our money. The meetings that we have been having with the councillor and other authorities are not helping us. It is all talk and no action.”

A community leader, who did not want to be named, said they had been pleading with the residents to be patient but people were now too angry.

Spokesperson for the mayor, Mthunzi Gumede, said the matter was being handled by ward councillor Qantsi and the Department of Human Settlement. On Monday, residents met Councillor Mondli Mthembu.

Correction: Originally it was stated that residents met with the mayor not Councillor Mthembu.