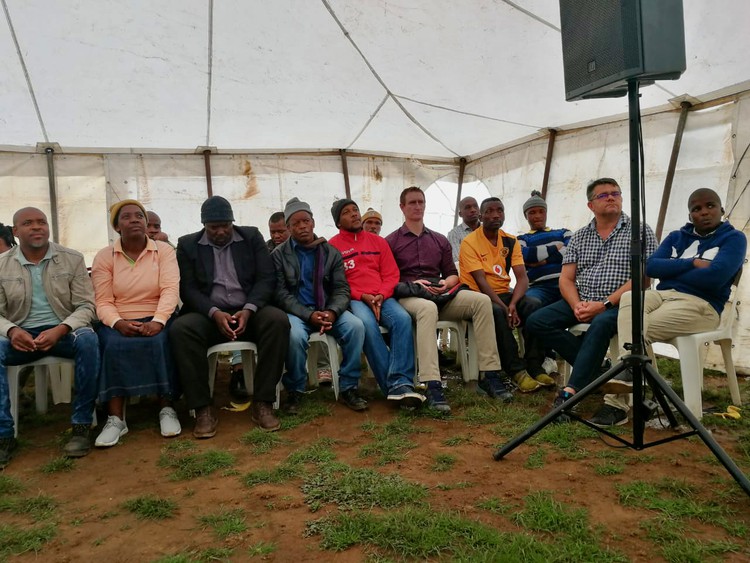 By Nombulelo Damba-Hendrik and Johnnie Isaac

Last week, protesting residents closed the Amahlathi traffic department and some of the schools around Stutterheim. They demanded the premier come to Stutterheim and address them.

Residents have been making allegations against the municipality for years. In September 2018, protesters closed the busy N6 between Stutterheim and East London, demanding jobs and basic services. In October 2018, municipal offices, a clinic and part of the Mlungisi Commercial Park shopping centre were torched. Two people died in that protest. Weeks of protests then followed.

After a meeting with protesters on 19 November, Eastern Cape Department of Co-operative Governance and Traditional Affairs Fikile Xasa announced that the Treasury would probe allegations of nepotism and “jobs for sale”.

Rumours circulated that a report by the Special Investigation Unit had not been made public.

On Thursday at a meeting in the Emjojweni Sports Field in Stutterheim, residents of Stutterheim, Cathcart and Keiskammahoek made it perfectly clear to Premier Mabuyane that they have lost all confidence in the council of Amahlathi Local Municipality.

Resident Xolani Mnyakambi told Mabuyane that they did not believe the municipality would act on any responsibilities the premier gave them. He accused councillors of failing to table council reports where some of them were implicated in corruption.

Another resident, Abongile Matiwane, told Mabuyane that there are municipal officials who are selling jobs to male applicants and offering jobs in exchange for sexual favours with female applicants.

“It is painful that our sisters have to take off their underwear in order to get jobs and us men must pay R5,000 bribes,” he said.

Residents asked Mabuyane to investigate millions of rands allocated to tar 70km of the road between Stutterheim and Tsomo and nearly four million rand allocated for the construction of a road through Rhabe Village at Keiskammahoek. Residents said they believe this money has been embezzled.

There were also 300 houses that were supposed to have been built in 2002.

Responding to a petition sent to the office of the premier, Mabuyane’s advisor Zandisile Quphe said that the Eastern Cape Department of Human Settlements is ready to build the 300 houses, but the delay was caused by Amathole District Municipality (ADM), which is yet to build infrastructure for sanitation and water.

Quphe also blamed the ADM for the sewerage problems at Cathcart.

Mabuyane apologised to residents for the provincial government’s failure to fix Amahlathi Local Municipality. He said government has tried a number of things, including Section 139B, which was to put the municipality under administrator.

He criticised councillors for failing to hold regular meetings with the community. “Councillors are suppose to meet with their communities at least once a month. I understand that such things are not happening here and that is why people are not aware of what is happening,” said Mabuyane.

He said the people have the right to protest but warned them about the consequences of destroying existing infrastructure. “When you burn a kilometre of a tarred road you are burning R13 million,” he said.

Mabuyane said the AMD will attend to sewage problems in the coming week.

Organiser of the Amahlathi Crisis Committee, Thembikaya Watshi, was upbeat after the meeting. “The problem before was that we would have several meetings, eight to nine meetings, but the resolutions taken were sent back to the same municipality we were complaining about hence there was no progress.”

Speaking at the meeting, Mjikelo said a council meeting will be convened and all the matters that should be in the council business will be dealt with in council.

Previously, Hobo has apologised to the people of Amahlathi in a public notice issued on 31 January.