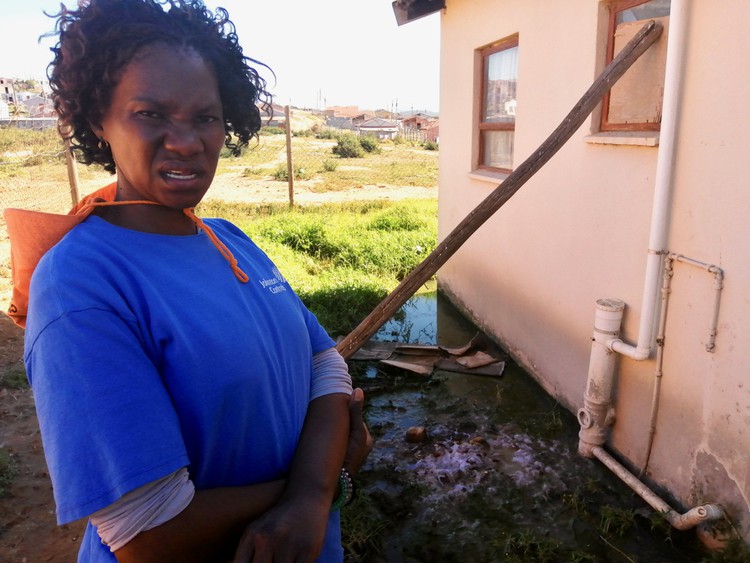 Cynthia Bhongo, a mother of three girls aged nine, 10 and 14, says sewage bubbles up in her yard in Uitenhage. She says her house is one of the worst. Photos: Thamsanqa Mbovane

Owners of RDP houses in Peace Village in KwaNobuhle, Uitenhage, say they live in a pigsty.

“Rivers of sewage have been running in our yards and streets for two years. This village is like a pigsty,” said Nombulelo January.

She received the keys to her home in Sakhwatsha Street in 2013 from then Mayor Ben Fihla, one of 430 new RDP houses.

“We can’t open windows. The whole area stinks … When we walk in the streets, it’s on tip-toe,” said January.

She said in November 2018, a team of workers came to her house, removed her toilet bowl and replaced it with a broken one.

“I only found out later… that they were thieves who stripped us of toilet bowls and put old ones. A municipal worker told me these people had worked for a construction company, and had been fired for selling toilet bowls they took from us,” she said.

January now uses her neighbours toilet and at night goes to the bush.

Resident Cynthia Bhongo said, “When I flush my toilet, human waste pops up in the bath.

“We jumped with glee when the mayor gave us the keys … But when I opened the door, an official sneaked in and told me and my family that this house’s concrete floor was wet … Clean water was seeping from underground pipes,” she said.

Bhongo said, “I feel that I live in a pigsty and neighbours say my house is worse than theirs … No one has been able to fix this mess for two years.”

Councillor Nontuthuzelo Skweyiya (ANC) said RDP homes in Peace Village were affected by blocked drain pipes. “We are busy putting new pipes in the area, and new streets and we will find a lasting solution for this problem.”

She said the Peace Village reservoir, which is about 50 metres from the houses, was making the situation worse. “When the reservoir is full, water overflows into the streets which have no storm water drain and causes flooding.”