Tired of waiting for government, Pietermaritzburg residents build their own mud houses

“We have been waiting for houses since 1999” 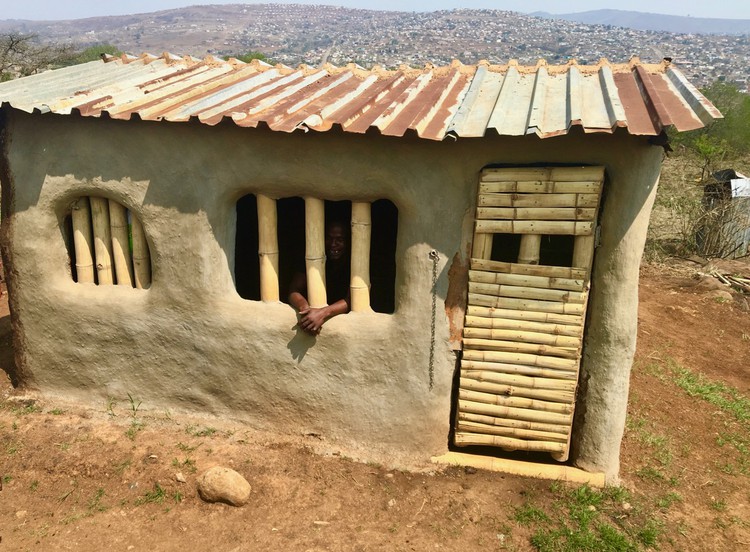 Thobani Dlamini has built a house out of mud and reeds. Photo: Nompendulo Ngubane

Tired of waiting for government housing, some residents in France location, Pietermaritzburg, have started building their own homes out of mud.

In March, Thobani Dlamini left his small family home, and with the help of his girlfriend built a one-room home from reeds and mud.

“It is not by choice, but the situation for France residents is now unbearable,” he says.

Dlamini is 31 and he survives by selling snacks and traditional beer. “I came to a point in my life where I was fed up … I am a grown man squashed in a small house with my family. We have been waiting for houses since 1999,” he says.

The back of the roof is covered with an old tent where Dlamini sells his beer. On the veranda he keeps snacks which he sells mostly to children. There is a pit toilet outside built of corrugated iron.

“The roof leaks when it rains and it moves when it’s windy. It is a tiny house. When it is hot, it boils inside. But we are slowly becoming used to it. I wish for the day I get a better house. Can our government just do one thing right for once and keep the promises it made to the people?” asks Dlamini.

Resident Mandla Zondo says the community is angry and has previously embarked on protests. “People are squashed in dilapidated houses and others have relocated and built shacks somewhere,” says Zondo.

Residents say that in November 2016 an imbizo was held in Willowfountain hosted by the Msunduzi municipality which the France community attended. They claim that at the imbizo Themba Njilo, the mayor, promised a housing project for 3,000 people.

Repeated attempts by GroundUp to get comment from Njilo failed.

Spokesperson for Human Settlement Mbulelo Baloyi said no housing project had been planned for the residents of France, now nor in the near future.