“Feed them in their areas” says association chairperson 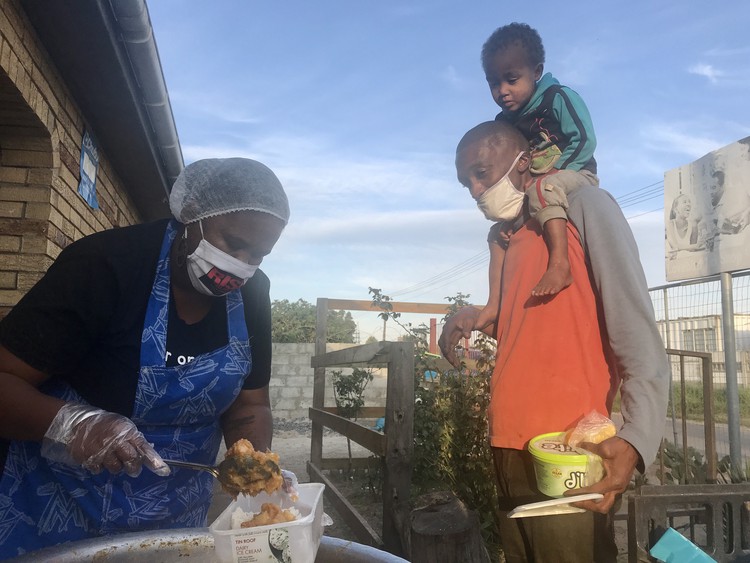 Eugene Tullex carries his son to Latifa Jacobs’s soup kitchen in Kuilsriver. He used to do piecemeal jobs but he has not found work since lockdown. He is collecting for his family of six. Photo: Tariro Washinyira

Members of a residents association in Sunbird Park in Kuilsriver, Cape Town, are at loggerheads with a community activist running a soup kitchen in the area. The residents want the soup kitchen closed.

In June, we reported on Latifa Jacobs’s soup kitchen which she runs from the front of her parents’ house in Lovebird Walk. Every day she encourages people to stand apart from each other and to wear a mask. She feeds hundreds of people, most of whom live in neighbouring Happy Valley and Sophia Town informal settlements.

“She should decentralise to reduce the flow of people and feed them in their areas. I never said she must stop feeding the Happy Valley community,” said Rudi Stevens, chairperson of the ratepayers and residents’ association.

“There were trucks loading off food parcels. Other residents complained about social distancing and overcrowding. When Happy Valley people finish eating, they throw half eaten containers of meals on the streets. If unaccompanied children who come to the feeding area get missing leaders of this area will be blamed, not Jacobs,” said Stevens.

“We went to her house and told her to stop feeding this week because of land grabbings going on which may put children in danger, but she swore at us,” said Stevens. He was referring to ongoing violent protests where a truck was petrol bombed and a section of the R300 closed by a group attempting to build structures on land nearby.

On Wednesday, Jacobs was called to a meeting with the association regarding complaints about her project.

Jacobs told GroundUp that she had been getting complaints and was often asked: “Why I support Sophia Town people who illegally connect from their electricity? Or why do I continue to feed Happy Valley people who are involved in land occupation?”

Residents also claimed that since she started the feeding scheme, crime has increased.

In a Facebook post on Monday, Jacobs noted that she was “tired of the so-called leaders who want to dictate where people must be fed”. Earlier that day, members of the neighbourhood watch stood on the road and turned away children and the elderly, she said.

“They told them the soup kitchen has closed down. We normally have about 300 people but on that day we didn’t even have half of them.”

“They also made accusations that people from Sunbird Park are not getting food, which is untrue. They said I must either go feed the people in Happy Valley or find somewhere else,” she said.