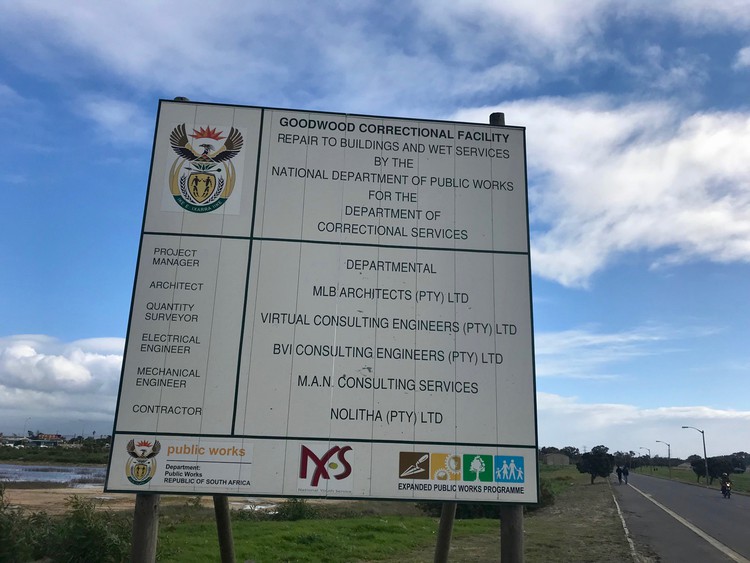 A woman has tried for nearly 10 weeks to get to visit her incarcerated husband at Goodwood Correctional Centre. Photo: Tariro Washinyira

A Zimbabwean woman, whose husband was transferred from Kraaifontein to Goodwood Correctional Centre, has been trying persistently to secure a visit with him for almost ten weeks. She has still not been able to see him.

“Daily, when I call around 7am to make an appointment I am told there is no vacancy. Appointments are fully booked,” Fadzai (name changed) told GroundUp.

Her husband was refused bail because he is undocumented and his case has been postponed several times. He is an awaiting trial prisoner, i.e. someone who has not been found guilty and sentenced.

Fadzai’s situation is similar to that of other people we met at the prison. Two people said they were there to leave money for their relatives in prison because they have failed to secure appointments.

Antea (name changed) had travelled from Eerste River to give his 36-year-old cousin some money. He had been refused bail and his case had been serially postponed since November 2018.

Fadzai’s brother-in-law says it pains him that he cannot get even a few minutes to see his older brother at the prison. “I wish they had allowed us to bring him some food. He told me on the phone that there is a shortage of food in the prison. The situation is stressful. Our family in Zimbabwe thinks we have abandoned him. They are calling daily for updates, yet we are also out of touch,” he said.

After receiving complaints about limited appointments, GroundUp tested the system. Whenever we called we were told there were no vacancies.

“There is nothing we can do to help you. The prison has more than 3,000 offenders. There are renovations taking place at the visiting area. We are taking a few visitors,” we were told.

Spokesperson for Western Cape Department of Correctional Services Mosele Sehloho said there is a telephonic booking system on a first-come, first-served basis. She confirmed there are about 3,000 sentenced offenders and detainees awaiting trial.

She said that 60 offenders are accommodated a day for a 30-minute non-contact visit. About 1,200 offenders are given an opportunity to have a visitor in a period of 20 days.

“As management it is imperative that service delivery both to the offender as well as the public is not hampered considering we accommodate an average of plus minus 2,000 awaiting trial detainees,” said Sehloho.

This answer doesn’t make sense to GroundUp. If each prisoner was given a turn for a visit, it would take 50 days for every prisoner to be visited (3,000 divided by 60). Fadzai has been trying for 70 days. The reference to 1,200 offenders suggests that the prison may only be facilitating visits to sentenced prisoners and not those awaiting trial, but this is unclear.

Sehloho confirmed that renovations had been taking place since October 2017 and were expected to conclude in November 2019.

Outside on the window at Goodwood prison entrance GroundUp saw copies of IDs and pictures on the window with “not allowed to visit the prison again” written below them.

Sehloho explained that these were persons who were caught in possession of contraband, such as knives, drugs and cellphones.

Asked about the shortage of food, Sehloho said: “There is no such thing. Offenders are getting three meals a day in line with policy.”

A lawyer who specialises in prisons said it seemed clear there was a system failure or an irrational system in place at Goodwood, since Fadzai had not been able to access her husband for a visit. She said that sentenced prisoners and those awaiting trial should have access to visitors. Renovations are not an excuse for denying visits, because alternative arrangements should have been made.

Sources asked that we do not use their names, fearing it will affect their prospects of seeing their relatives.