“I cry everyday and worry about my first child’s future. I may never see my husband again” 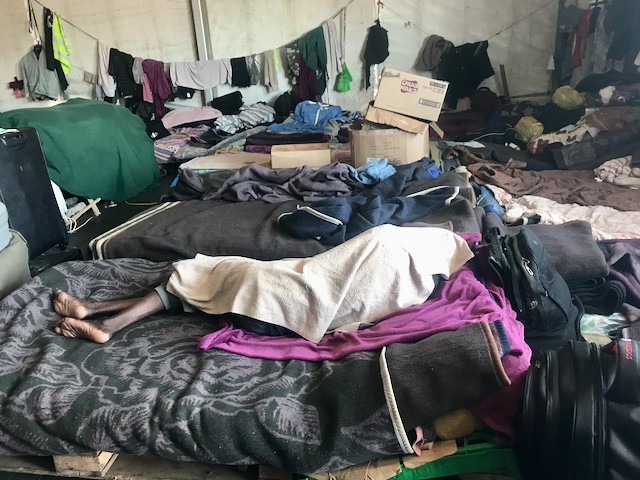 Refugees in the Bellville camp in Cape Town who protested outside the UNHCR offices a year ago, begging to be resettled in other countries because of xenophobic violence in South Africa. Photo: Tariro Washinyira

The 20 asylum seekers and refugees from the Bellville refugee camp, Cape Town, arrested on 29 October, are being held in Lindela Repatriation Centre, separated from their families. They include refugee leader Aline Bukuru.

“The deportation of the 20 foreign nationals followed due process and was confirmed by the court on 2 and 3 November 2020 in terms of the immigration laws of the country,” Home Affairs said in a statement.

Aline Nduwimana, originally from Burundi, who is heavily pregnant, said, “I cry everyday and worry about my first child’s future. I may never see my husband again. He never called me since he was arrested.”

United Nations High Commissioner for Refugees (UNHCR) spokesperson Kate Pond said on Friday: “The group currently facing deportation are all adults and the vast majority are men, although we understand family unity is affected as they all have relatives living in the sites [camps]. We want to underline the vital importance of keeping families together, and urge the South African authorities to act accordingly.”

“No one should face repatriation to a place where their life may be endangered. In these circumstances, the individual in question would be in need of international protection,” she said.

She said the organisation is also providing counselling and following up with the relevant authorities to ensure legal proceedings are upheld and rights are respected.

Since the refugees started with a protest outside the UNHCR office a year ago, they have demanded to be allowed to leave South Africa for a country other than the one they fled. They have been repeatedly told this is highly unlikely to happen.

Hafiz Mohammed, from Bangladesh, who was based in the Northern Cape, joined the UNHCR office protest after his three shops were looted and torched. “I can’t go back to such a community,” he said.

Meanwhile the Bellville refugee camp is being wound down even though there are about 630 people in the camp, of whom 280 are children. Toilets and showers were removed on 9 November.

Refugee leader Unice Akellow said, “We are saying no more South Africa. We believe they are trying to make the situation difficult so that we can give up … But we are still here.”

In a statement on 13 November, Global South Against Xenophobia, part of the Covid-19 People’s Coalition, demanded the immediate release of the 20 refugees held at Lindela.

“Deportation is not the answer … One suggestion for Home Affairs to move towards proper integration is to perhaps focus on its administrative failings and discriminatory practices … The processing of asylum seekers’ applications, according to Home Affairs policy, should take 180 days or six months. However, people are stuck in the system for up to 19 years.”

GroundUp tried repeatedly to get comment from Home Affairs without success.