Today, in a camp far from the city, they insist on being allowed to go to a third country 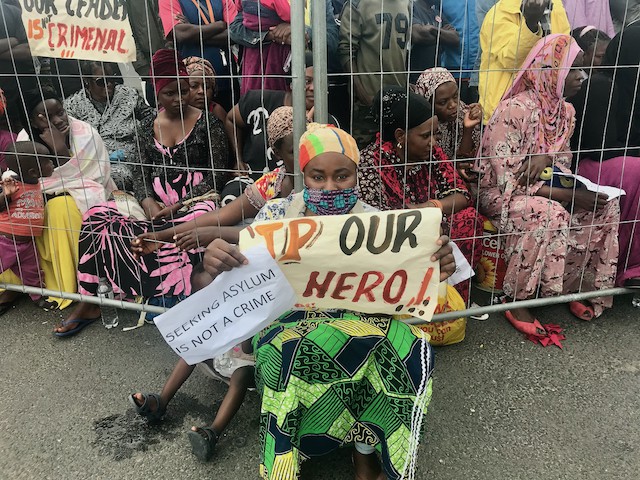 Refugees at a camp in Bellville marked one year since they started their protest outside the UNHCR in Cape Town. Photo: Tariro Washinyira

Refugees in a camp in Bellville marked one year on Thursday since they started their protest outside the United Nations High Commissioner for Refugees (UNHCR) offices in Cape Town.

It was a day packed with activities, including dance performances and a dramatic production about the struggles of refugees. A speech by refugee leader Aline Bukuru was punctuated with cheering and ululating from the crowd.

Children and adults held placards: “Seeking asylum is not a crime”, “Where is justice”, “Our leader JP Balous, free him from eight months of false accusations, arbitrary detention!!”.

The refugees’ protest started on 8 October 2019, first as a sit-in at the UNHCR offices off St George’s Mall. They were removed in a chaotic operation and ended up spending months on Greenmarket Square and occupying the Central Methodist Church until April 2020.

Weeks after Minister of Home Affairs Aaron Motsoaledi warned the protesting refugees to reintegrate or face being sent to their original countries, many were relocated to camps in Kensington and Bellville by the City of Cape Town as the Covid-19 pandemic gripped the country.

Bukuru said institutional xenophobia, documentation problems and discrimination against of refugees has not ended and the “SA first campaign” has made things worse.

“Our demand is still the same. We continue to say we need help from the UNHCR to help us leave the country. They must stop pointing fingers. Their mandate is to protect every refugee without discrimination.

“To the government, we need them to accept the fact that xenophobia exists in South Africa. When you don’t accept that you are sick you never get healed … When they are denying that there is no xenophobia it means they are promoting crimes against humanity,” she said.

Bukuru said when people fled persecution in their countries they chose to go to South Africa because they had heard that South Africa had a good Constitution that protects refugees.

“How can you live in a community which doesn’t like you and says SA first?” she asked.

Spokesperson for UNHCR Kate Pond said, “The UNHCR continues to strongly encourage protesters to return to the communities, particularly during this time of unprecedented health concerns.”

City of Cape Town Executive Director for Safety and Security Richard Bosman said, “The City and the Department of Home Affairs are busy with a process of engagement to find a sustainable solution to the reintegration of the affected persons back into the communities. The implementation, once approved, will be done within the parameters of the national Disaster Management Act regulations. The process has not been finalised yet.”