Refugees in limbo after eviction at UNHCR 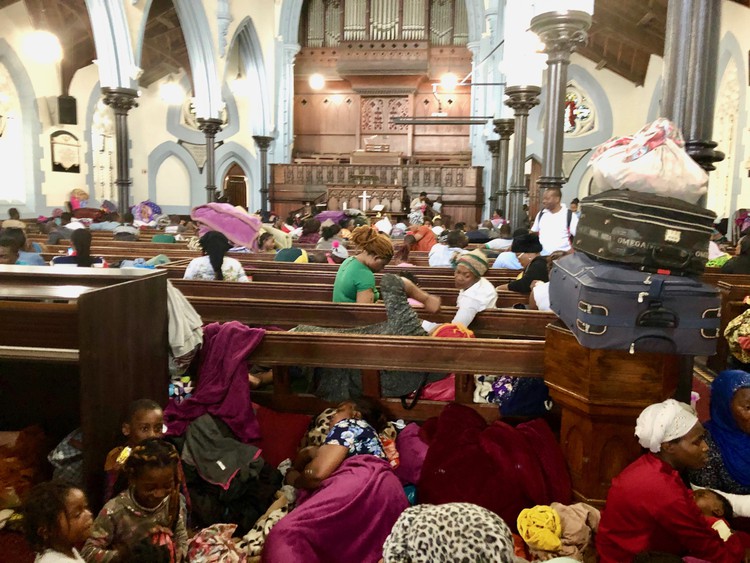 By Madison Yauger and Mary-Anne Gontsana

The Central Methodist Church on Cape Town’s Greenmarket Square is overflowing with refugees after they were evicted from the Waldorf Arcade on Wednesday.

They had been camped outside the United Nations High Commissioner for Refugees (UNHCR) demanding to be moved to other countries because of xenophobia in South Africa.

Men, women and children crowd every pew, aisle and corner. Suitcases are stacked, and people step over one another to walk through the space.

One of the leaders of the refugees, Jean Pierre Balous from the Congo, addressed the growing crowd of refugees and onlookers outside the church. “We want to thank our pastor and our church, who amongst all the churches in the CBD, decided to open the doors in order to accommodate the victims that were brutalised by the police of South Africa.”

“I was a target,” Balous said. “If I’m standing here in front of you, that means God wants to save your lives. We will speak louder and clearer that the government of South Africa does not protect refugees.”

“We are not giving up our fight. And we will leave South Africa.”

Balous expressed anger at some of the organisations that had been aiding the refugees and said they were no longer welcome “to be here”. But he did not give reasons for this.

He later told GroundUp, “I’m feeling very painful.” He showed his scraped knee from being dragged to the police truck on Wednesday before he was taken to Cape Town Central Police Station.

“They took everyone’s cellphones, wallets. They impounded all the cars around. They took belongings, documents, everything,” he said.

But Brigadier Novela Potwela, SAPS spokesperson, denied this. She said she was in the police station until 8pm. She said she saw the refugees being brought in, but no one was placed in a cell. They were processed and then released.

UNHCR calls on protesters to return to their homes

The UNHCR said on Wednesday that it is closely following the developments of the refugee eviction. “UNHCR appeals to refugees and asylum-seekers involved in the protests in Cape Town and Pretoria to respect the laws of the country. We also call upon them to return peacefully to their residences in South Africa. UNHCR and its partners stand ready to provide assistance to those in need.”

Meanwhile activists have started a collection for the refugees. Items such as children’s medication, basic first aid equipment, nappies, wet wipes and clothes for men, women and children can be dropped off at the old Woodstock Hospital or St. George’s Cathedral.

The Methodist Church had planned its annual unveiling of a yellow banner highlighting a social issue on Thursday. Last year it unveiled a yellow banner calling for the decriminalisation of sex workers. While this year’s unveiling was interrupted by the events of Wednesday, a new yellow banner that was still unveiled and aimed at another homeless population in Cape Town.

The banner, hung on the Burg Street side of the church, reads: “Golf courses or social housing? What would Jesus want?”

Reverend Alan Storey told GroundUp that the banner came from a report by Ndifuna Ukwazi which stated that people were asking for accessible land to the City.

“Today is the United Nations World Cities Day. We are always told that there is no land in the City available to build houses, yet there are big golf courses and multiple storey parking lots. What kind of City are we building? We do not need a golf course in the City. So the banner is to highlight the continued struggle for housing, land and environmental justice in our city,” said Storey.