Tafadzwa Mukwayo makes pillows out of recycled material, and sells them 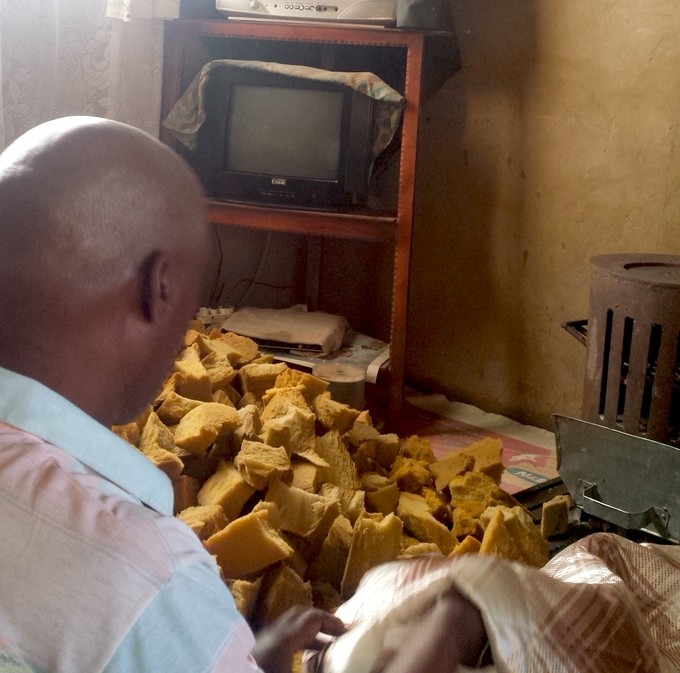 Mukwayo drove tractors on an avocado and orange farm in the country´s Eastern highlands farming belt, but lost his job in 2007 when his employer gave up land to resettled villagers.

In 2010, he arrived in South Africa and succeeded in his refugee application, but then he faced the difficulty of finding work.

“Employers in South Africa doubted my tractor driving experience,” says Mukwayo. “That is when I joined [homeless people] who collect plastic bottles in central Johannesburg for a living. It was humiliating, but I am thankful, I found a gap in the market.”

The answer was right under his nose.

“Instead of collecting old sofa tissue for recycle, I thought, well why don’t I make fluffy pillows on the East Rand where competition is non-existent? That´s when I moved to Boksburg,” he says.

With a grant of R1,500 from the Madzibaba Apostolic Zion Church in 2013, one of the larger immigrant churches on the East Rand, he bought a Singer sewing machine and employed two young men to scour the bins of Boksburg schools, stores and suburbs for foam and discarded woollen clothing from factory dumps.

“I pay them R500 for their efforts and make sure they buy soap, mielie meal and fresh clothes, not glue and beer,” he says.

It takes a week to soak, clean and sanitise the materials.

“Each pillow must weigh 1.5kg and be stiff, but not rocky on the neck.”

“Immigrants from Zimbabwe prefer my pillows,” says Mukwayo. “They complain high street shop pillows in South Africa are either too large, too thin or too expensive.”

He says he can’t keep up. “I am astonished by the demand for my pillows.”

His cheapest pillow sells for R150. A pillow branded with a customer’s name sells for R300.

“I even patronise Newtown International Bus Station in downtown Johannesburg to supply Zimbabwe-bound customers with my pillows.” He laughs: “I’m exporting!”

From spending six months in 2010 getting neck cramps from sleeping on bags, he is now earning a living manufacturing pillows from nothing.