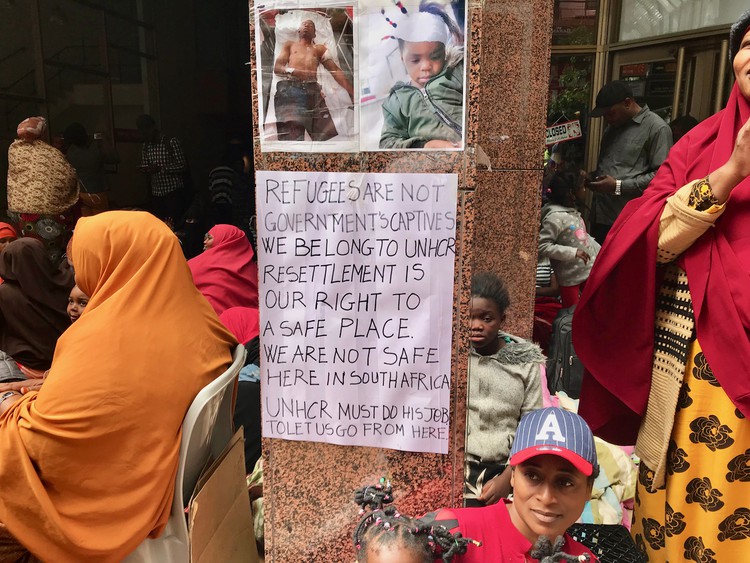 Pictures of victims of xenophobic attacks were put up on the walls of the building housing the UNHCR in Burg Street, Cape Town. Photo: Tariro Washinyira

After camping for a week outside the offices of the United Nations High Commissioner for Refugees (UNHCR) in Cape Town, refugees say they will stay put until their demands are met.

The refugees and asylum seekers want to be relocated to countries such as Canada, the United States of America, New Zealand and Australia because they face xenophobic violence in South Africa.

During the course of the week the group has grown in size and has now stopped traffic in Burg Street. There are hundreds of people, including many children.

Protesting refugees and asylum seekers told GroundUp that they have not bathed the whole week. Most are unemployed and their children are not in school.

When GroundUp visited on Monday the group were singing and chanting slogans. Pictures of victims of xenophobic attacks had been put up on the walls of the building housing the UNHCR. A poster read: “UNHCR must do his job to let us go from here.”

“There is no future for our children. They cannot write matric examinations. They do not have proper documents,” said Jean-Pierre Balous from Western Cape Leadership for Refugees, Migrants and Women.

A Congolese man, Floris Bigirimana, had fresh wounds on his swollen face and head. He said he had been attacked on Friday by a mob in Worcester when he went home for a bath and a change of clothes.

“They [his attackers] said, ‘Now you want to be big; we saw you on video saying bad things about us and our country’. I managed to escape.” said Bigirimana.

Asad Khan, originally from Bangladesh, has been at the sit-in for five days. He travelled from Mthatha in the Eastern Cape. He said he spent two weeks in hospital after he was attacked during a spate of xenophobic attacks in September.

“My life is in danger. I am here to demand that UNHCR move me to another country,” said Khan.

“I lost everything when they attacked me and robbed my spaza shop … So I am not in a hurry to leave [the protest]. Before they attacked me, they shouted, ‘Who gave you the authority to stay here?’” he said.

“It’s two years now since my asylum expired. I can’t go to renew it at Home Affairs in Pretoria without money. I was turned away several times because I cannot afford to pay for a bribe. I can’t look for a job without a document,” said Khan.

Ellies Mushinange Mukande from the DRC said he had been in South Africa for 22 years. He runs an electrical repair shop in Philippi. He said he has to pay R200 a week in “protection money”. He said other refugees pay even more.

“If I don’t pay, they break in at night … We are not safe here [in South Africa]. I am going to camp here as long as it takes,” said Mukande.

GroundUp has tried for a week to get comment from the UNHCR.