Red ants and rubber bullets are the only service delivery we know, says Brakpan resident 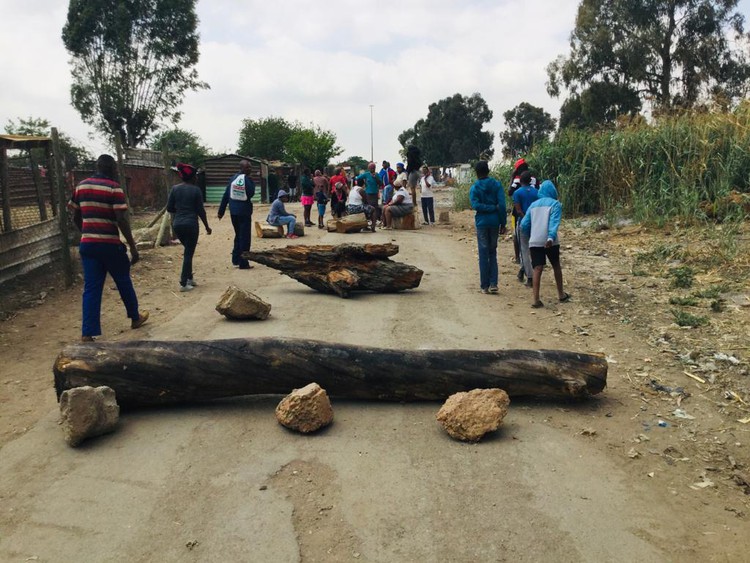 On Thursday residents of Mkhandla informal settlement in Brakpan protested after red ants knocked on their doors at about 3am, disconnected illegal electric connections and confiscated cables.

(Red ants is the generic term the residents use for the people acting for the municipality, usually dressed in red, who carry out evictions and disconnections.)

Residents responded by blocking the main Ergo Road with stones and burning tyres. They also lit tyres on top of a nearby railway line.

When the situation intensified Metro police fired rubber bullets at protesters. Some were arrested. Residents went on to block the entrance of the informal settlement with big logs. They set some of the logs on fire. They also threatened to block the nearby N17 freeway. Some children who did not go to school due to the tense situation joined the protest.

“Police came into my home and arrested my 36-year-old son. What has my son done because we are not the only ones using izinyoka [illegal connections]? the whole community does because we have no choice,” said Maria Nzuwa.

She said that Mkhandla has relied on illegal electricity for more than a decade. Other residents explained to GroundUp that the red ants had removed connections during previous years but people always reconnected the wires. Each family pays R300 monthly for illegal connections. The electric cables for the connections are stolen from street lights.

“We live in a dangerous community where criminals do as they please. People are mugged and raped. Living in the dark worsens the situation. We have been promised electricity by the municipality but that never happens,” Nzuwa said. She said the community had made a collective decision to connect illegal electricity.

Protesters said the City of Ekurhuleni had promised them electricity and that they would be built houses. They said some shacks burnt down five weeks earlier and that one child was choked by illegal wires in September.

“Many accidents happen in our informal settlement all because we do not have electricity,” said community representative Manchis Monathi. Monathi said a Mayoral Committee Member addressed the residents in September 2018, promised electricity and promised to report back within three months. “We are still waiting.”

Councillor for the area David Thulane Simelane said: “The City is losing a lot of money due to illegal connections.” He acknowledged that the residents were promised electricity and housing. “However the informal settlement is sitting on privately owned land. The municipality is currently negotiating with owners of other plots to buy land. But not everyone in the informal settlement qualifies for housing. We are having cases of people owning RDP houses in other provinces and they will not be given houses.”

Residents said they would continue with the protest on Friday.