Waste pickers must be integrated into the formal waste management sector, says researcher 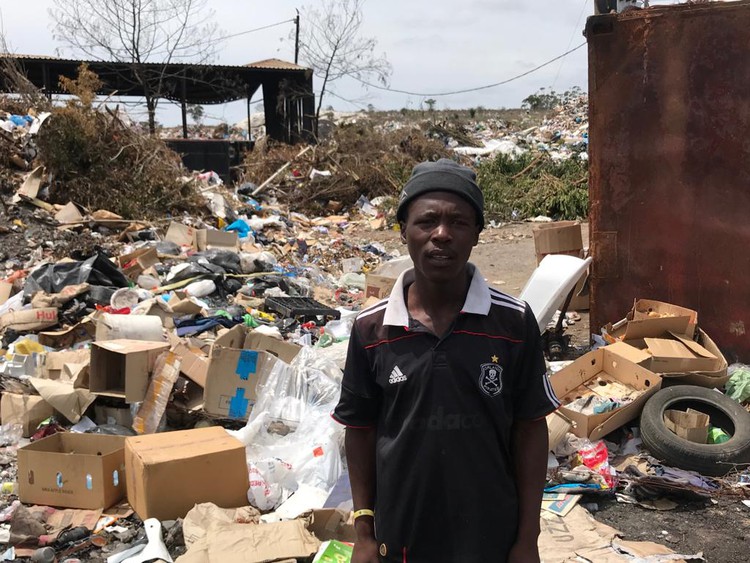 Fistoz Notyawa has been a waste picker for over three years. He says the municipality does not recognise the service he provides. Photo: Mishka Wazar

Fistoz Notyawa, 28, is a waste picker who lives on a landfill in Makhanda (formerly Grahamstown) in the Eastern Cape. He collects recyclable material to sell to scrap yards and buyback centres. He moved to the landfill in 2015 from Joza, a township in Makhanda. He works eight to ten hours a day, making between R60 and R140.

Notyawa, like the majority of the estimated 100,000 waste pickers in South Africa, started waste picking to stay off the streets and provide for himself in a country with an unemployment rate of 27.1%.

Professor Rinie Schenck is based at the University of the Western Cape and researches waste management. She says that informal waste pickers recycle 90% of the recyclables collected from households in South Africa. This possibly saves municipalities up to R750 million in landfill space every year.

Waste pickers face many challenges working in the informal waste economy: they are prevented from access to landfills in some municipalities, stigmatised by government and the public, exposed to unhealthy working conditions and vulnerable to volatile price changes on the scrap market.

Schenck says that the only way to overcome these challenges is to integrate waste pickers into the formal waste management sector.

Melanie Samson of Wits University has been working on a project called “Lessons from Waste Picker Integration Initiatives”. It is funded by the Department of Science and Technology, as well as the Department of Environmental Affairs which is developing national guidelines for waste picker integration.

The guidelines are being worked on by representatives from waste picker organisations, municipalities, industry, government and NGOs. They are expected to be finalised in April 2019.

Samson says that a major challenge has been that each party has a different understanding of the existing recycling system. She says it is important to develop a common understanding with waste pickers sharing their experiences.

Samson has looked to Latin American countries for examples. “In countries like Brazil, Columbia and Argentina, you have well-developed models where cities pay for their service,” says Samson. “When a municipality contracts private companies to recycle, they pay the company a collection fee, while waste pickers [in South Africa] are not paid for the collection services they provide.”

According to Samson, a vital part of waste picker integration is their participation in decision making within the waste management process and recognition of the public service they supply. It also requires what Samson calls “social integration”. She says government and industry need to “transform how waste pickers are seen, appreciated and valued by residents, industry and government officials.”