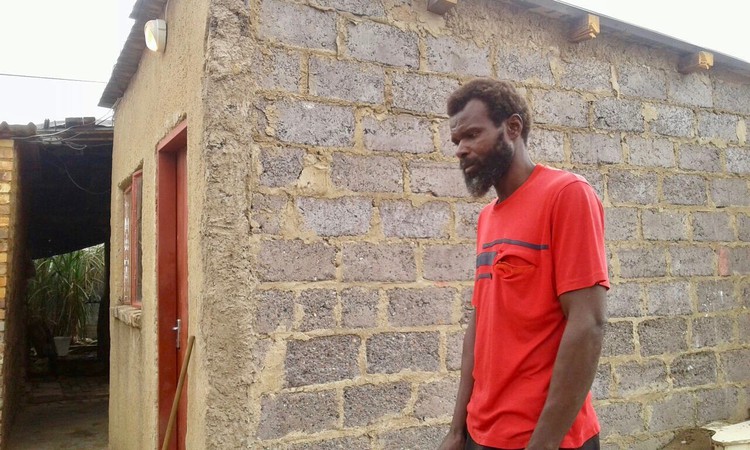 Joseph Sithole had to demolish one room and part of the lounge of his brick house to make way for a road. He says he was not compensated. Photo: Zoë Postman

Residents of Vusimuzi, an informal settlement in Tembisa, South of Johannesburg, are resisting the “reblocking” of their area by the City of Ekurhuleni.

Reblocking involves repositioning shacks in densely built informal settlements to open up pathways and roads for emergency vehicles or for the provision of water, electricity and sewerage services. But it requires some residents to move and rebuild and in many cases to give up living space.

Jack Mavusa had his six-room shack reduced to three rooms. He said the City did not give him any warning before demolishing one side of his shack.

When GroundUp visited him, there were couches, tables and a washing machine piled up in his yard.

“They first tried to move me to another yard but I refused. I’ve stayed in the same place for almost 24 years and I lost a lot after they demolished my shack,” said Mavusa. His wife and six children live with him.

Phineas Moloi, a member of shack-dweller organisation Abahlali baseMjondolo, told GroundUp that the Vusimuzi community initially agreed to reblocking because they were not aware of what it would all entail.

Moloi said the ward councillor held a community meeting in October last year where he “manipulated the community” into thinking reblocking would bring water and electricity. He said the councillor did not mention that the size of people’s shacks would decrease substantially to make space for the roads.

Moloi said the size of a shack was at first going to be 12x9m2. After the community complained, the ward councillor increased it to 16x12m2, but Moloi said some residents remain against the reblocking. People have extended their shacks over time and the sudden decrease in size has “left them stranded” he said.

Another member of Abahlali, Morakane Moloi, said she had asked the ward councillor to warn the community before demolishing shacks. “At least then we can send our furniture to the nearest neighbour. But when they [the City] come, they just work that day; so they destroy your shack even when you are not there and leave your furniture out in the rain,” she said.

Lindiwe Ngcukana said the City, without any warning, demolished part of the second room of her shack. As a result her shack flooded when it rained. Some of her household items were damaged.

“They [the City] also destroyed my cement floor and left me with a mud floor in this room,” said Ngcukana, who has lived in Vusimuzi for seven years.

Joseph Sithole moved to Vusimuzi 18 years ago. He lives in a brick house, but one room and part of his lounge had to be demolished. Sithole works for the company carrying out the reblocking. He said he persuaded the company to allow him to do the demolition himself.

“It took me three weeks because it was built with bricks. It’s not as easy as demolishing a shack. But they [the company] said I should have only taken two days, so they did not pay me for the rest of the time I spent demolishing my own house,” Sithole told GroundUp.

Spokesperson for the City of Ekurhuleni Themba Gadebe said stakeholder engagement meetings were held on 31 July and 25 August last year where reblocking was explained to the community. Gadebe said that at the meetings the “information was received well by all the participants”.

Gadebe said the reblocking programme aims to install legal electricity and increase the number of water standpipes in the area.

“Re-blocking is not imposed on any community … We are mindful that a smaller section of the community that is not representative of the general community, can unjustifiably block progress. But if the community in its entirety does not need re-blocking, resources can readily be redirected to other communities in need,” said Gadebe.