Reappointed for a third term: Learners tell Motshekga to get it right this time 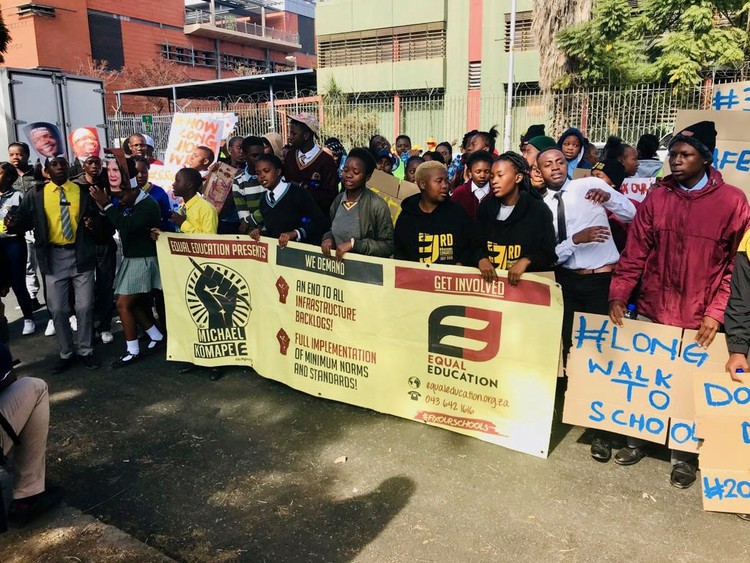 On Tuesday, dozens of students from Gauteng, KwaZulu-Natal, Limpopo, the Western Cape and Eastern Cape picketed outside the Gauteng Department of Basic Education in Pretoria. They wanted to hand over a memorandum of demands to Minister Angie Motshekga.

They said it was high time her department fixed the infrastructure in the country’s schools, the overcrowding and the violence that learners experience. They also demanded that a proper scholar transport policy be put in place.

Equal Education (EE), with representatives from schools in various provinces, staged a mock swearing-in ceremony for the Minister, spelling out what her priorities ought to be for the department.

“Angie Motshekga’s reappointment as Basic Education minister for a third term means that she must now demonstrate the urgency in meeting her mandate, spoken of by President Cyril Ramaphosa when he announced the new cabinet,” read the memorandum.

“We cannot afford another five years of weak political will, desperately poor planning, ineptitude, faux accountability, and perpetual passing of the buck,” the memorandum said.

Equal Education want the minister’s contract to be made public. They want the contract to include that she must comply with the Norms and Standards for Public School Infrastructure, that the department must achieve a measurable and radical improvement in early grade literacy rates, and that she must be obliged to engage with civil society at regular intervals.

Yolanda Magugu, a learner from Tembisa, said, “We learn in wooden classrooms and some of them do not have doors or windows. Surely, we deserve better?”

Amahle Ngobeze from Maceba Secondary School in KwaZulu-Natal said, “Some students walk as far as 10km every day to get to school … We are still using pit toilets.”

In a media statement, Equal Education said: “The latest annual provincial school infrastructure progress reports are not worth the paper they are written on.”

It said the information provided about the implementation of the Norms and Standards for School Infrastructure lacked crucial information and contained inaccurate and sometimes conflicting data. Some provinces simply repeated data from previous reports.

For example, EE said, “Entire sections of the Eastern Cape report has simply been copied and pasted from the previous report!”

It asked how the provincial departments could fix the country’s schools if it didn’t even have reliable information and did not know where the backlogs were.

“The 2020 deadline of the Norms and Standards is looming, and it is clear that most provinces will fail to comply with it,” it said.

Motshekga was not available to receive the memorandum. A representative from the department, Paul Sihlabelo, received it on her behalf.

The department was given until 1 July to respond.