City obtains an interdict against rebuilders 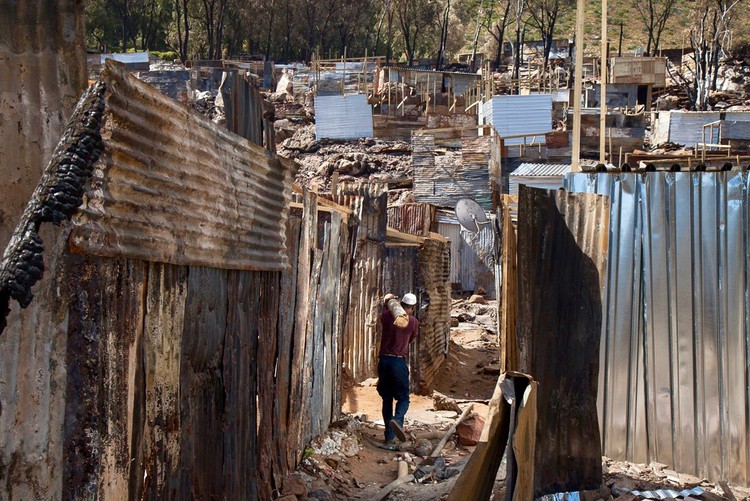 Residents have been rebuilding in Imizamo Yethu after a devastating fire. Photo: Ashraf Hendricks

Many residents in Imizamo Yethu are well advanced in rebuilding homes after a fire on 10 March left thousands homeless.

Alderman Ian Neilson had stated that “City Law Enforcement will be dismantling all structures before Monday”. The plan is to reblock the entire fire-affected area, a process in which the housing structures in the informal settlement are reorganised in a way that allows emergency access and services to the settlement.

Executive Mayor Patricia de Lille, in a statement on Saturday, said, rebuilding in the interim “flies in the face of the majority of the residents who are patiently waiting to rebuild in the standard, demarcated and serviced plots”.

But faced with the amount of rebuilding that has taken place, Pierrinne Leukes, the mayor’s spokesperson, said: “Overnight, the illegal erection of several large structures took place. This has hampered progress.”

“The City started issuing the [building] kits today [Monday], but will suspend the process in order to give the community a chance to discuss whether they agree to the City’s reblocking plans.”

“An interdict has been obtained” against people “who occupy, or attempt to occupy or erect structures on portions of the area in question”, said Leukes.

Last week, the City said it had reached an agreement with the community leadership, but when GroundUp visited the site, the area was well on its way to being resettled. On Monday morning, residents said they were waiting for the City to come as they had heard that their homes will be demolished.

“We have community leaders agreeing on our behalf to things that we do not want, while they [the leaders] are staying in their [formal] houses,” said Manelisi Jeku. He and his neighbours said they had not been engaged by the City. “We want the development, but they came at the wrong time. What we want now is our places [own shacks], not tents.”

Another resident, Ziyoni Sigcawu who has been living in Imizamo Yethu since 1993, said this is not the first fire in the area and that it is not the first time that the City had promised development in the area. “We have seen people being moved after a fire and promised things that never happened. We still have people staying in temporary houses seven years after they were promised it would be for a short while,” said Sigcawu. He said these were the people who had been moved to make way for the main access road.

Soyiso Mbonjeni said most of the people that have accepted staying in community halls and in tents set up by the City and are those that are renting properties.

Mbonjeni and Jeku said developing the area from a clean slate will not take a week but months. “I don’t see myself living in a tent at all,” said Jeku.

“What we want — and they [City] would know if they came to sit with us — we want to start building. [Only] then the City can identify the places where they want to open these roads,” said Mbonjeni. He said the City needs to move people section by section to the Imizamo Yethu housing project and not into tents.

These are the houses the City’s Transport and Urban Development Authority is currently implementing in the area. Councillor Brett Herron, the Mayoral Committee Member for Transport and Urban Development, said: “These units will be constructed across three sites in Imizamo Yethu. The construction of civil engineering services – roads, sewerage, water mains – on the first of these sites commenced in February 2016. A total of 492 units will be provided on that site, and another 423 as part of a later phase on the other two sites.”

De Lille has suggested densifying the project from duplex units to flats with many storeys to accommodate more people.