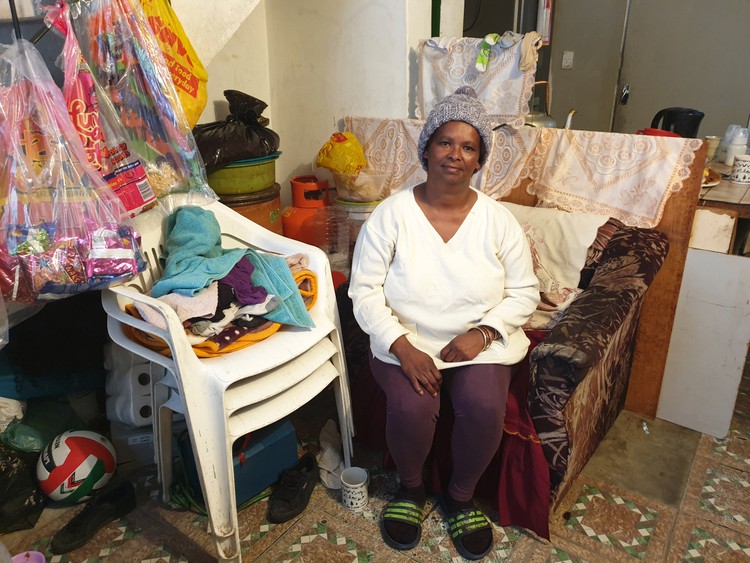 Surya Visagie says her RDP house is in poor condition and she cannot afford to fix it. Photo: Mary-Anne Gontsana

Surya Visagie of Heideveld received keys to her double storey RDP house in 2016, but ever since, she says, it has been falling apart. Electric wires hang freely, the walls have mould and damp, the ceiling trapdoor is missing, and the toilet is tiny. She was forced to remove the bathtub after it started leaking and damaging the floor. It now lies in her backyard.

“I was so happy and excited when I received my keys … but the happiness has vanished,” she said.

“The moment I moved into this house, the first thing that happened was that one of my lights just suddenly blew a fuse and fell out,” said Visagie.

“I don’t know how many times I have been to the municipality … I am unemployed, and I am hardly making enough to buy electricity,” she said.

Visagie sells sweets, chips and spices to children and people who come to her front door, exchanging the cash for the goods.

“I live with three of my children and my granddaughter who is one year old. I worry about her … The wiring here is dangerous; water comes through the door when it rains and my bedroom window cannot close properly,” said Visagie.

Visagie and another nearby resident, Margaret Wilskut, were among 50 Heideveld residents who marched to the provincial legislature on 1 August to complain about how shoddily their homes were built.

The walls of Wilskut’s house are mouldy. She keeps a wooden board at the bottom of her front door to stop rain coming in. Her toilet leaks when it is flushed.

“I was a backyarder and on the housing list for 33 years before I received this house. But I am so disappointed. I am constantly trying to find ways of how I can fix things around here. I am a pensioner. My pension is not enough to fix all the damages,” said Wilskut.

Mayoral Committee Member for Human Settlements Malusi Booi said that as the legal owners, the beneficiaries are “fully responsible for all matters pertaining to the house, including its upkeep, maintenance and repairs.”

“After residents move into their new homes, they are given an allocated period of time during which they can compile a snag list of issues related to the workmanship so that the contractor can investigate and address it. This is the time during which issues such as settlement cracks, which are normal in all new buildings, are dealt with. Once this latent defects period has expired, then beneficiaries are responsible for maintenance of their own homes,” he said.

“All houses must conform to the minimum standards for housing, and are subject to inspection by a number of inspectorates, including the City, the Western Cape Government and the National Home Builders’ Registration Council. This should ensure that work is completed to the highest standards. All Heideveld houses were signed off in terms of these requirements,” said Booi.