Raw sewage flowing since October from broken pipe in PE

Residents say they have repeatedly reported the issue, but municipal workers never come 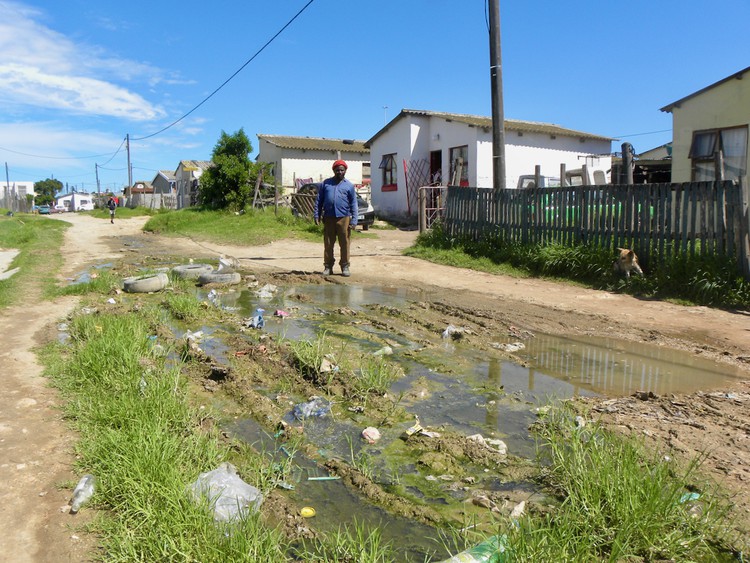 Vukile Seti, a resident of Mahambane Steet in NU10, Motherwell, shows the sewage flowing into his street. Photo: Joseph Chirume

Vukile Seti, a Port Elizabeth resident, says a sewage pipe broke outside his house in October 2019 and has still not been fixed.

“I reported to the municipality several times. I have reference numbers for each report I made. The excrement has blocked [off] several houses and raw sewage is flowing in the street. Part of the street is covered with long grass as a result of being watered by the sewage,” said Seti of Mahambane Street, NU 10, Motherwell.

Seti’s neighbour, Goodman Nqungwana, said they struggle with the pungent smell of raw sewage. He said his family has to keep their windows and doors shut.

“I reported three times to the municipality and I have proof in the form of reference numbers they gave me. The people receiving our calls just told me that they are sending a team of workers to fix the problem but no one has ever arrived,” he said.

Nelson Mandela Bay Municipality spokesperson Mthubanzi Mniki said, “We are prioritising the issue of repairing and attending to sewage breakdowns. Our technicians will visit the areas and they also work after hours so residents should report their grievances to our call centre.”

Meanwhile, families in Kalendula Street, NU11, say they have been living with raw sewage flooding a trench in front of their house for the past two years. The excrement runs through Kalendula Recreational Park opposite their homes, where resident Pumza Mazomba says children from various Motherwell neighbourhoods play.