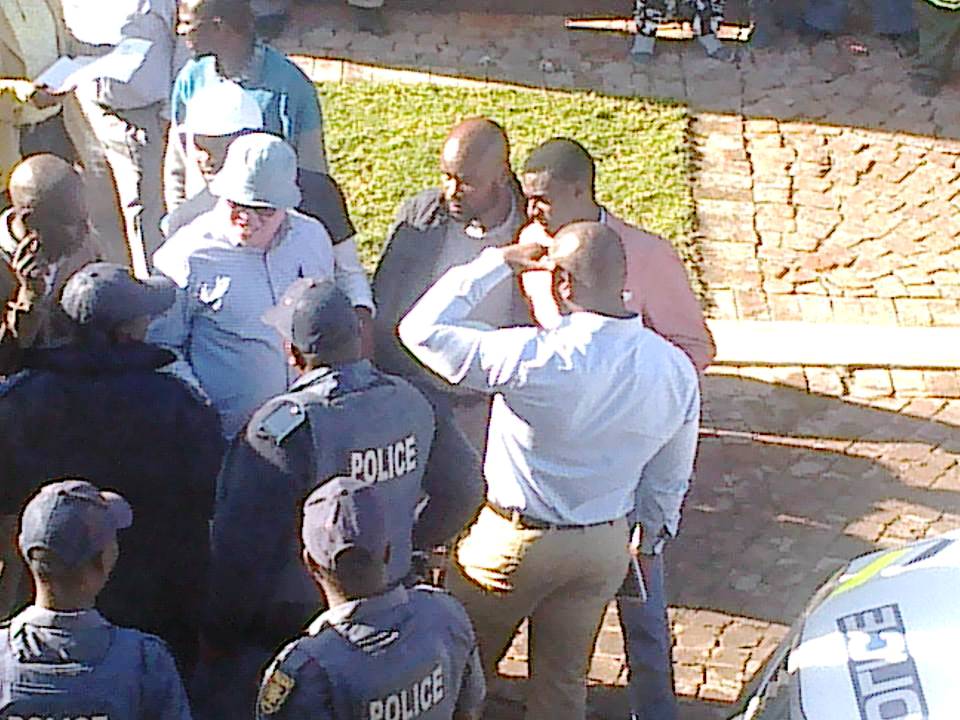 On Thursday, a crowd of around 150 people, including members of the Bapo Ba Mogale Traditional Council, forced Madibeng FM, a community radio station in Brits, to cancel a live interview with critics of the community’s leadership.

Shouting and banging could be heard over the telephone as Bapo activist Lesego Kgobane described the scene, about an hour after the interview had been scheduled to begin.

Station manager Nick Motloung, who was following events from home, where he was recovering from an illness, said the station was forced to agree to a moratorium on reporting about the Bapo’s financial affairs until a meeting could be set up with traditional authorities.

“We will suspend talking about it until further notice,” Motloung said.

The Bapo delegation consisting of the community based organisation Serodumo Sa Rona and the Bapong Concerned Group are known critics of the Bapo Traditional Council. They were invited to talk about a 2014 transaction between the Council and Lonmin, which paid R640 million in cash and shares for free access to Bapo land for the next 50 years, a right to a 12% royalty on mining profits and a 7.5% share of the lucrative Pandora Joint Venture.

The criticism concerns the opaque nature of the deal, the concentration of benefits in the hands of the Bapo Investments empowerment company and the lack of consultation before it was concluded.

Several community groups including Serodumo Sa Rona have asked the Public Protector to investigate the transaction.

The community delegation, who had to wait several hours before they could safely leave the building, were outraged that the station had been silenced.

Before the discussion could go live on air, traditional council members showed up with about 150 people. They were chanting, slamming the door and shouting that they wanted to speak to the manager.

“We are supposed to give the community information but they are disrupting us. It is the traditional council, the ambassadors and a group of the unemployed. They are very aggressive,” said Kgobane.

The group supporting the traditional council’s business ventures is known as The Ambassadors, a group of unemployed youth accused of being used by Bapo Ba Mogale Investments CEO Lehlohonolo Nthontho to serve as his bodyguards, and silence his critics in the community.

Police were called to the scene and facilitated an agreement between the radio station and the Traditional Council that the station should stop reporting on Bapo issues.

“The situation is calming down after we have spoken to both parties. They have reached consensus,” said a spokesperson for the police, Officer Talane.

The community delegation, who had to wait several hours before they could safely leave the building, were outraged that the station had been silenced.

“That’s a rubbish, I am pissed off. We are supposed to be telling the community what is happening,” said Kgobane.

Madibeng FM is a community radio station in Brits, North West. The radio station has been broadcasting a series of talkshows about the history of Bapong and issues the tribe continues to face. Issues raised include questioning the legitimacy of the traditional council, headmanship disputes in several villages, community grievances and demands for accountability for community revenues.

Motloung said that during this series his life had been threatened – twice by callers to live broadcasts.

“I am being bullied, I am being followed. I was threatened live on air. One said to me that I must not come around Bapong, he is going to get me and he is going to kill me. The other one said that there is a hit list and my name is on that hit list,” Motloung said.

He said the station was too small to be able to resist the assaults from the traditional leadership, but he appealed to other media to pick up the story and promised to resume unrestricted broadcasting as soon as possible.

“This must become a national thing now. We need national media to pick up the story,” he said.

The station was silenced right before crucial events that are scheduled to take place in Bapong.

The provincial Public Protector is expected to meet community leaders today (Friday) about the investigations of the traditional council.

On Saturday, a community meeting is scheduled to resume after it had been disrupted. There is now a court order issued asking the Traditional Council not to interfere with this meeting.

On Monday, Public Protector Thuli Madonsela is expected to report back to the community on her investigation into the disappearance of hundreds of millions of rands in mining royalties from the community’s trust account, D-account.

On Friday, police again had to intervene. Supporters of Nthontho came in three buses to hand over a memorandum. The crowd chanted at the gate, demanding to see the station manager and accused the station of violating an agreement by attending a meeting in Rustenburg with the office of the public protector in the province.