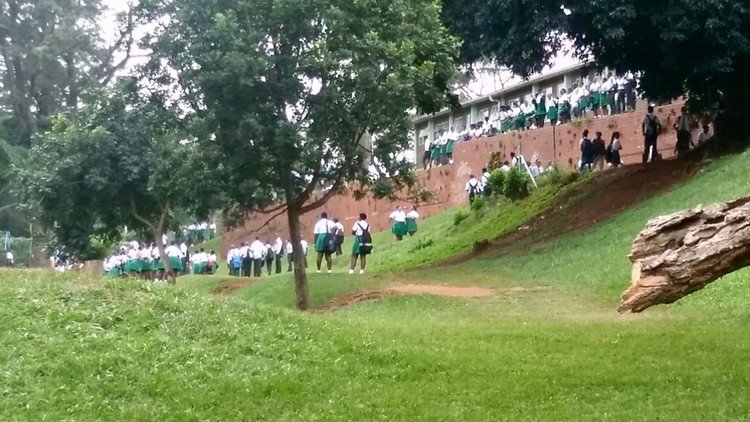 Teaching was disrupted at Parkhill Secondary School in Greenwood Park, north of Durban, on Monday. Learners at the school refused to attend class, demanding that the school address allegations that a teacher made racist insults.

GroundUp spoke to several black learners who said they had reported a coloured teacher for racist remarks a number of times, but the school principal has not taken action.

A Grade 12 learner, Wandile Zuma, said the most recent incident took place on Friday. “We were in the middle of a Life Orientation class when Miss [whose name is known to GroundUp] said she wished it was still apartheid because she would bury all black pupils alive without encountering any problem. It was not the first time she threw racial comments,” said Zuma.

“I remember when one of my classmates brought a cellphone into class last month, Miss held it with her fingertips and she called my classmate a k——r … When she finds a coloured pupil in possession of a cellphone in class, she does not say nasty comments or hold it [the cellphone] as if she was holding some piece of dirt,” said another learner.

The learners said the teacher would make comments such as she did not know why black learners leave schools in their townships and come to schools in the suburbs.

Learners said that when they had reported such incidents to the school principal, they were told to leave the teacher alone.

Philisiwe Mthembu, a parent, said, “Last year my son and his coloured friends were in the wrong by bringing space muffins [made with dagga] onto school premises. Because he is black, he was the only one who was suspended for two weeks. When I went to ask why the teacher punished only him, I did not get an answer.”

The teacher refused to comment. The school principal said GroundUp had no right to be at the school and threatened to call security.

KZN Department of Education spokesperson Kwazi Mthethwa said: “We condemn racism and we are going to make sure that those who continue to promote this barbaric act are punished. Racism does not have a space in our system; it’s satanic and it should be treated as such.”