Foundations for the Umdloti Bridge were finished in October 2018 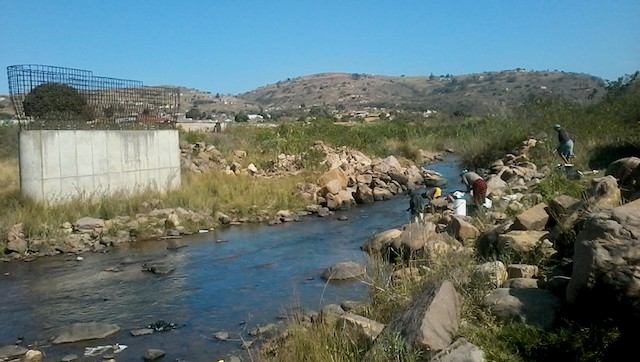 The foundations for the Umdloti Bridge, a R65.7 million project, have been left untouched since October 2018. Photo: Nokulunga Majola

The foundations for the Umdloti Bridge, a R65.7 million project, have been left untouched since October 2018.

Residents of Ogunjini in Verulam, north of Durban, say the project had created jobs for many people in the area and they are disappointed it came to a halt.

Nana Mthembu said she almost drowned once on the old causeway. “There are no barricades to protect people when a speeding vehicle passes … I think it was built as a temporary solution in the first place. We were hoping that the new bridge would be safer.”

“Many of our brothers and sisters lost their jobs when the project was stopped and most of them are still unemployed. It’s been over two years and still we don’t know what happened,” said Mthembu.

“We are hoping that when the project resumes they will do the right thing and employ people from the community,” said Thulani Gama, who had worked on the project. He hasn’t had any luck finding another job.

According to the KwaZulu-Natal Department of Transport, the contractor could not meet the contract specifications and this led to a breach of contract.

“Due to no progress on site despite the departmental intervention, the contract was terminated,” said spokesperson Kwanele Ncalane.

He said the department was busy finalising specifications and would re-advertise the contract for another supplier to complete the works on site.

“The process normally takes approximately six months for the contract to be awarded and another 42 days to get the Construction Work Permit so that the contractor can start construction,” he said.

Ncalane said once construction commenced, work on the bridge was expected to take 12 months.

The original contractor was Tekewini Civils CC. GroundUp managed to reach them but they have not responded to our questions.