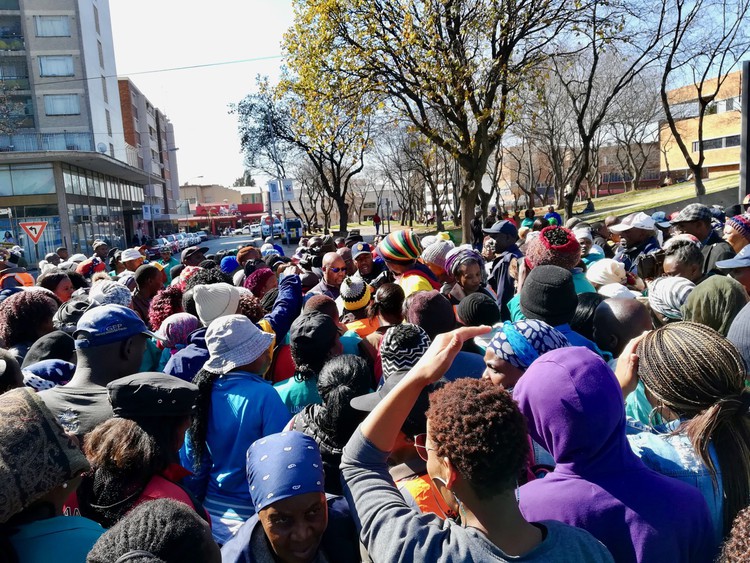 About 200 former workers for the municipality picketed outside the Civic Centre in Germiston on Thursday morning. They are demanding that Ekurhuleni Municipality make them permanent employees. Photo: Zoë Postman

“We need our jobs back,” said former municipal worker Barrington Makamba. “We have families to feed and when we are lucky enough to find an odd job, it is not enough to sustain us … We were supposed to be made permanent by Ekurhuleni Municipality but we weren’t, so now we need to be reinstated.”

Makamba was among 200 former municipal workers, first employed under a job creation programme called Lungile Mtshali in 2014, picketing outside the Civic Centre in Germiston, Johannesburg on Thursday morning.

The workers had previously cleaned the streets, drains, old age homes, municipal buildings, cemeteries and parks. The programme ended in June 2015, after which the workers referred a case to the Commission for Conciliation, Mediation and Arbitration (CCMA) because they were not made permanent employees after three months.

The case was heard before commissioner Timothy Boyce at the Bargaining Council in Germiston in May this year. Boyce found that the Municipality should have made the workers permanent and ordered that about 200 workers should get R6,000 compensation.

But the workers are not satisfied with the award and are demanding that the municipality make them permanent employees.

Makamba worked under the Lungile Mtshali project for two years. He said he has been doing odd jobs since the contract ended.

“Although the award is out, we still want our jobs back … An award of R6,000 is not enough,” said Makamba.

A memorandum was handed to representatives of the Mayor of Ekurhuleni Mzwandile Masina.

Themba Gadebe, spokesperson of the City of Ekurhuleni, told GroundUp that the workers “raised unfounded allegations of promises of employment”.

He said that under the Mtshali programme workers were given fixed-term contracts for 12 months only. “The programme was never intended to be full-time employment but rather for imparting skills and the City met the requirements of the programme,” said Gadebe.

He said the participants in the programme were to receive credits and certification after they completed the service period stipulated in their contract. He said some workers had refused the training.

The workers gave Masina 24 hours to respond to the memorandum. If he does not respond they say they will occupy the Civic Centre.

The memorandum was received and signed by the special programme manager in the mayor’s office, Sonnyboy Masingi, and senior political advisor to the mayor, Bennett Nikani. They said the workers could expect a response on Friday next week as Masina was out of office.