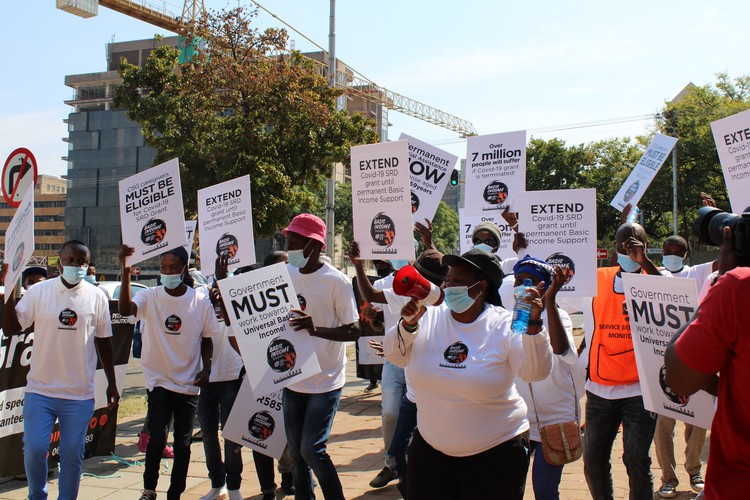 Activists picket outside the National Department of Social Development (DSD) offices in Pretoria on Thursday, calling for the extension and increase of the Covid-19 Social Relief of Distress Grant. Photo: Masego Mafata

About 50 people picketed outside the National Department of Social Development’s (DSD) offices in Pretoria on Thursday, calling for the extension and increase of the Covid-19 Social Relief of Distress Grant. The grant is expected to come to an end next week.

As part of the #PayTheGrants campaign, the Black Sash handed over an open letter, endorsed by 86 civil society organisations.

“There are six demands in this letter, but our biggest demand is for the extension [to last] until the implementation of a basic income guarantee for all,” said Thandiwe Zulu, regional manager of The Black Sash in Gauteng, during the handover.

The letter was received by the acting director general of the DSD, Linton Mchunu. He said, “The matter will receive attention and in due course. We will respond accordingly.”

The picket then moved to SASSA’s head office in Pretoria, where the group handed a letter to Raphaahle Ramokgopa, acting chief executive officer at SASSA. “We will consult with the department and treasury to come up with a coherent approach in responding to the issues,” said Ramokgopa.

Boipelo Motsepe, of the Katekani Community Project, said receiving the Covid-19 Social Relief of Distress grant helped him make ends meet while he struggled to find a job. “After graduating from engineering, I was at home for almost three years because I struggled to find employment. With the R350, I was able to buy data and apply for jobs,” he said.

Motsepe, who is now a volunteer at Katekani, said that “while the R350 is a start, it is not enough”.

The #PayTheGrants campaign also called for the urgent implementation of the Basic Income guarantee for people between 18 and 59.

“A lot of people are unemployed, poverty is rife and a lot of people have lost their jobs through retrenchments. Unemployed people between the ages of 18 to 59 do not qualify for a [government social] grant,” said Ntsoaki Moreroa, a paralegal field worker at Black Sash.

Another demand was for the Covid-19 relief grant to be increased to R585.

“We are demanding that the R350 be extended to R585 to meet the poverty line,” said Vincent Skhosana, a paralegal field worker at Black Sash. Skhosana said it is difficult for people to meet the basic standard of living if the grant is below the poverty line.

During an interview with eNCA on 21 April, Minister of Social Development Lindiwe Zulu said once the grant ends — which is expected to be at the end of April — the department would release how many people had received the grant during lockdown.

According to SASSA’s most recent presentation to the Portfolio Committee on Social Development, about six million people have received the Covid-19 relief grant per month.