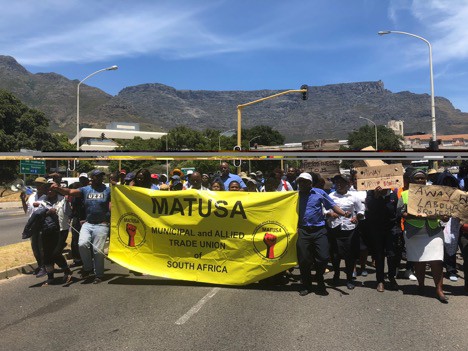 About 100 people from the Extended Public Works Progamme, MyCiTi, and the Municipal and Allied Trade Union of South Africa marched to the civic centre in Cape Town to delivered a third memorandum addressed to the mayor. Photo: Kim Reynolds

As part of the Expanded Public Works Programme (EPWP) Anti-Exploitation Campaign, about 100 people including EPWP workers, MyCiTi bus drivers, and members of the Municipal and Allied Trade Union of South Africa (MATASU), marched to the civic centre in Cape Town to deliver a third memorandum addressed to the mayor. They are demanding insourcing and permanent jobs for contract workers.

Organiser and spokesperson for the campaign Mike Khumalo told GroundUp that the workers were handing in the same memorandum as the ones submitted and signed on 2 and 16 November to “show consistency” in their efforts. Khumalo said the group is “seeking a dialogue” between EPWP and the City.

City representatives and Councillor Sharon Cottle signed the memorandum. The mayor did not meet the group.

Secretary of the Anti-Exploitation Campaign Shirley Nxusa told the crowd: “We are not puppets; we are not ghosts; we are EPWP workers. We clean the streets of Cape Town. When the tourists are coming down here, they see the City of Cape Town clean because of us, nobody else.”

The memorandum expresses solidarity with the MyCiTi bus strike, which has been ongoing since mid-October, noting that the campaign supports the MyCiTi request that “the City should honour and employ the MyCiTi employees directly”.

The memorandum outlines the demands of the campaign, which include: “Review and improve the EPWP employment criteria for permanent jobs” and “allow EPWP staff to join a trade union of their choice”.

Chairperson of the campaign Peter Jack said the workers “won’t rest” until their demands are heard. He believes that the City is ”exploiting workers” with short term contracts, paying them less for the same work done by permanent workers.

Mayoral Committee Member for Safety and Security; and Social Services, Alderman JP Smith said, “The EPWP is a national programme and the conditions of employment are set by the National Department of Labour. Each public body is required to develop its own policies to align to the national legislation and guidelines on EPWP.”

“The National Government reviews the EPWP guidelines every five years. A process is currently underway to review and improve the programme for the next five-year phase which will run from April 2019 until March 2024. EPWP work is temporary in nature, as per the national guidelines, and it does not make provision for EPWP work as permanent employment,” said Smith.

He said, “The City has embarked on a public employment skills development process that aims to provide EPWP workers with relevant training and experience in order to facilitate the participation of workers in the formal job market. Under these conditions workers are performing tasks in an auxiliary capacity. Workers are engaged in practical work to ensure that the experience gained is of value to their future prospects.”