Debate on future of Tafelberg property heats up

Affordable housing or private school? Deadline for submissions is 9 June 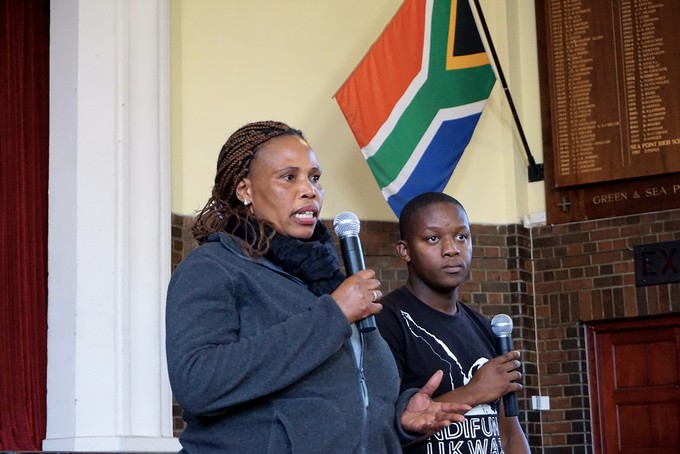 Sea Point residents joined Reclaim the City on Saturday to voice concerns about the sale of the Tafelberg school site by the Western Cape Department of Transport and Public Works.

The public hearing held at 1pm at Sea Point High School was convened by Ndifuna Ukwazi (NU), who took the provincial government to court in April to interdict the transfer of the site. NU and Reclaim the City would like to see the land used for affordable housing.

Following an agreement reached in May, the sale of the property was opened to a 21-day public comment and objection period, which ends 9 June.

A petition circulated by Reclaim the City has garnered about 2,200 signatures and 420 objections to the sale. These will be submitted to the provincial government.

Meanwhile, the Phyllis Jowell Jewish Day School (PJJDS), which originally bought the property from the province, has been campaigning in support of the sale. They have garnered about 3,500 signatures on a petition, and have received about 100 written submissions.

“While our community is sensitive to and supportive of affordable housing solutions in the city, we remain of the view that the Tafelberg site is suboptimal and unsuitable for this purpose, not least due to the high land cost and the heritage aspects of the site,” wrote Samuel Seeff, chairman of the Western Province Priorities and Planning Board, and Lance Katz, vice chairman of the PJJDS, in a press release.

Saturday’s public hearing was an opportunity for community members to present oral submissions as part of the comment process. Premier Helen Zille and Councillor Jacques Weber were invited.

In its press release, Reclaim the City said Zille declined in writing, stating that neither the Western Cape Land Administration Act nor the court order required her attendance, but ‘she confirmed that a record of this hearing would however be admissible as a submission on the proposed disposal’.

Nkosikhona Swartbooi of Reclaim the City preceded the comments from the public by highlighting a feasibility study on the site that found that the Tafelberg property could accommodate almost 350 social housing units. “This site should not be sold when we have such a backlog of housing,” he said.

Community members spoke about the struggles of working class people in Sea Point who either live in the backyards of their employers or are forced to commute long distances from townships. Swartbooi translated these comments in order to ensure both English and Xhosa speakers could fully participate.

Elizabeth Gqoboka, a 47-year-old single mother who has lived in Sea Point for 22 years as a domestic worker and now as a caregiver, said many workers who lived at the back of their employers’ properties were not allowed to live with their children and couldn’t receive visitors.

“We want to have our own lives, live with our families and see our grandchildren grow up in front of us,” she said. She pointed out that she has heard people objecting to affordable housing because it would decrease the value of their properties.

“Why is it that I downgrade your property if I don’t downgrade your children when you go to work?” she said. The audience of about 100 broke out into cheers. “I’m smiling, but I’m broken inside,” she said.

On 9 June, Reclaim the City plans to march to the Tafelberg site and hand over objections to the provincial government.

Siphesihle Dube, spokesperson for the Minister of Transport and Public Works, said the provincial cabinet will consider the submissions before determining whether or not to proceed with the sale. If the decision is to continue with the sale of the property, Reclaim the City plans to go to court again to stop the transfer.