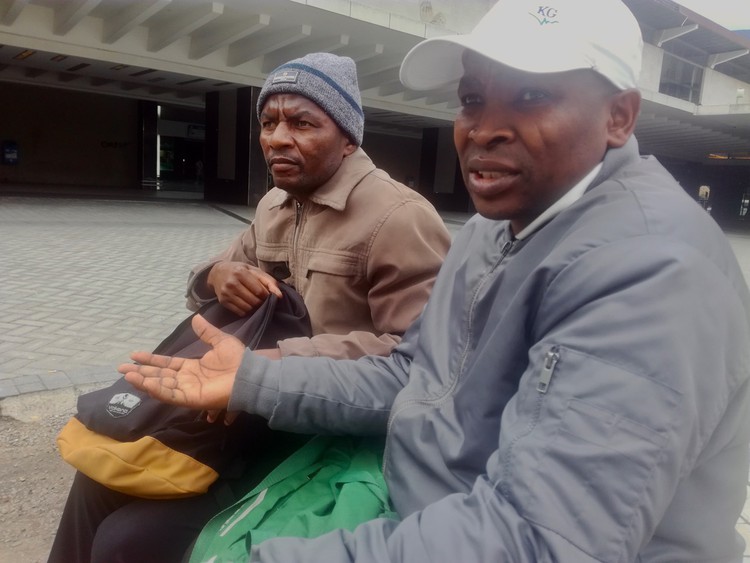 Former employees of Proexec Security Network, Fikile Vakele and Andile Bani of Gugulethu say the company has not paid salaries owed to them or paid over deductions made for their provident fund contributions. Photo: Barbara Maregele

The Private Security Sector Provident Fund is taking the owners of a Cape Town security company to court over a payment dispute.

The case will be heard at the Western Cape High Court on 13 September.

Several former employees of Proexec Security Network say they were cheated out of their hard-earned money. They are now relying on the fund to help them get justice.

Until around September 2017, Proexec Security Network employed over 200 guards at buildings and apartment blocks in the Sea Point area. In May 2017, GroundUp spoke to a handful of workers who discovered that the company had not been paying their provident fund for several months. Yet the company had made monthly deductions from the workers’ salaries.

At the time, the Fund confirmed that Proexec was “registered, but not compliant” due to outstanding fund payments of over R2.6 million.

The former employees say they have become frustrated after making countless bids to recover their money. The company no longer operates.

Fikile Vakele, from Gugulethu, worked for Proexec from 2008 to April 2017. Vakele said he resigned in April after the company’s owner, Geoff Levy, began “dodging questions” by workers. He said the company failed to pay his salary for two months as well as his outstanding leave days.

“We told the people of the building where we worked and they were shocked. They at least put money together so we could have something. What made me angry is when I went to the provident fund to find out what was happening, they told me I only contributed R1,500 for nine years. How can that be?” he said.

Vakele said that despite several meetings with the fund manager, workers were still in the dark about whether their contributions would be recovered. “We are upset because we worked for so many years and got nothing,” he said.

Vakele said he was lucky to find work at another security company. He added that as the sole breadwinner, his family suffered financially for months without his salary. “My parents also depend on me to send money back home in the Eastern Cape,” he said.

Andile Bani also worked for Proexec for eight years. “I began asking why I never received a statement saying how much I had saved in the provident fund in 2014. But on my payslip there were deductions and it showed a contribution from the employer,” he said.

“We’ve suffered a lot. When all of this was happening last year, my wife was pregnant and we didn’t know what we were going to do. Now I’m on the credit bureau because of all the accounts I couldn’t pay last year. It was hectic.”

GroundUp spoke to Levy’s wife, Natasha Levy, who said that she was aware of the legal action, but could not “say more than that right now”.

Fund spokesperson Sindiswa Changuion confirmed that nothing had changed since May 2017 regarding the money owed to the fund. Changuion said Proexec’s file has been handed over to its attorneys who are suing the owners in a bid to recover funds.

“The fund undertook a recovery process sanctioned by the Pension Funds Act as well as the fund’s rules. The fund is currently pursuing criminal charges against the Directors of Pro Exec Security. A civil claim has been lodged in this regard.”

She said it was unclear how many people were affected by the company’s non-compliance as the owners “failed to provide payroll data to the fund as required”. Changuion added that only members who no longer worked in the security field could withdraw their benefits from the fund.