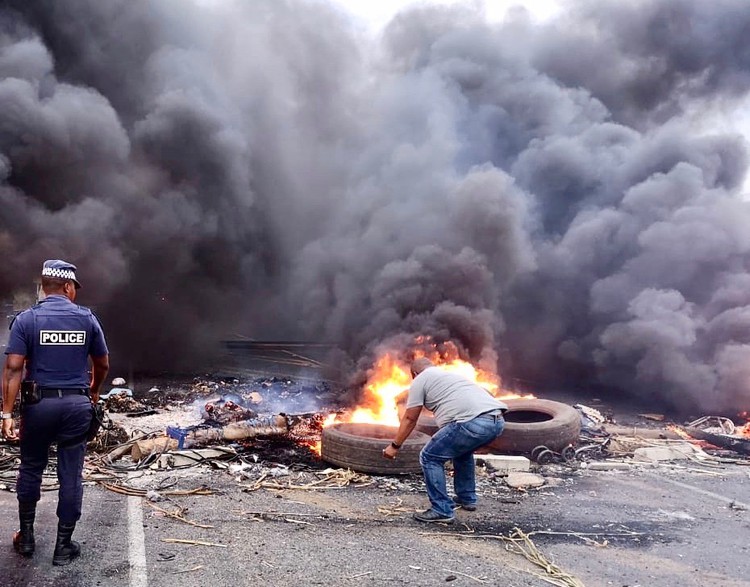 Residents burnt tyres and rubble on the road demanding to be moved from Isipingo transit camp after staying there for nine years. They say they were promised they were only going to be at the camp for eight months. Photo supplied.

Over 100 residents of Isipingo Transit Camp, south of Durban, blockaded Platt Drive and Old Main Road with burning tyres and rubble in the early hours of Thursday. This was not their first protest.

The protesters say they were told they would stay only eight months in the transit camp before being moved to proper houses, but it has now been more than nine years. They were originally living in various informal settlements in KwaMnyandu in Umlazi and Mayville, as well as the Bluff.

Residents say four people were injured in the protest when they were hit by rubber bullets, however this could not be confirmed by police. Police spokesperson Lieutenant-Colonel Thulani Zwane advised the injured victims to open cases.

Thabile Maphalala, from Isipingo, said, “We are living like animals here. There is no service delivery … With the rainy season fast approaching, it is going to be a big problem as the water comes into our houses.”

“They must fulfil their promises and stop feeding us lies. We want action, nothing more,” said Maphalala.

Councillor for Ward 90, Sunil Brijmohan, said families had been allocated houses in the Cornubia Housing Project. “The total number of families in the Transit Camp was 750 and the families that have been moved is 312. The balance will be moved to Cornubia Phase 1B … into the two housing projects, which have been approved to be developed in our ward. The first being 360 units and the other 840 units along Nogin, Sayan and Orient roads.”

Spokesperson for the mayor Mthunzi Gumede said, “We are committed to resolve the Isipingo issue and other areas that were affected by October storms. We are in contact with the ward councillor and the mayor is doing everything in her ability to get the matter resolved. We apologise for the delays.”

Ethekwini Metro police spokesperson Senior Superintendent Parboo Sewpersad said, “The protesters attempted to throw petrol bombs at the police and later ran for cover to the camp when they saw the police vans approaching them.” He said no arrests were made.