Movement says it is making plans to shut down Vodacom service 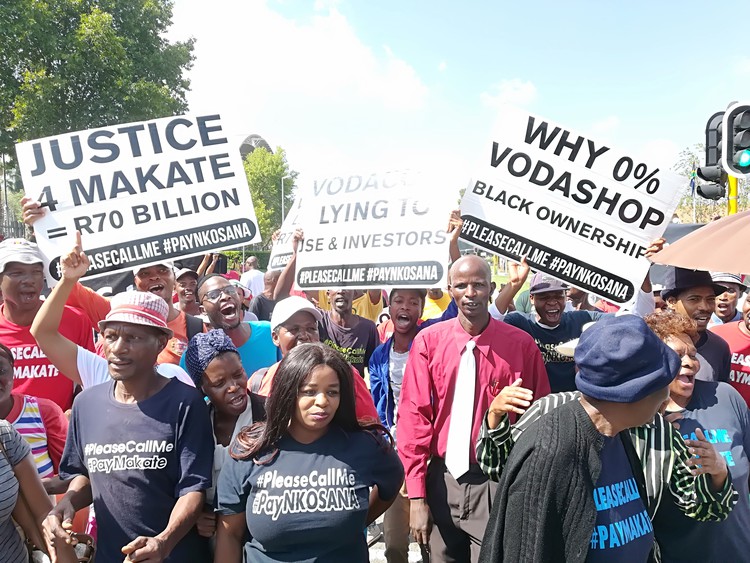 About 200 people protested outside Vodacom Head Offices in Midrand on Thursday demanding that Nkosana Makate, inventor of the Please Call Me service, be paid R70 billion compensation. Photo: Zoë Postman

By Zoë Postman and GroundUp Staff

About 200 people protested outside the Vodacom Head Office in Midrand on Thursday demanding that Nkosana Makate, a former Vodacom employee who claims the company stole his “Please Call Me” invention, be paid R70 billion. This is about four times Vodacom’s reported cash on hand in 2018.

Protesters held placards saying “Justice for Makate” and “Vodacom pay Makate”. Two Nyalas and a row of police officers barricaded the entrance of the phone company’s property. The head office appeared to be shut during the protest.

Please Call Me Movement, the organisation that organised the protest, had given Vodacom until 10am on Thursday to pay the R70 billion to Makate.

Please Call Me is a free service launched in 2001 that allows cellphone users to send a text request asking to be called back. Makate says he invented the Please Call Me service 18 years ago and pitched it to his boss at the time, Phillip Geissler. The idea was then submitted to Vodacom by Geissler‚ who told Makate in an oral agreement that he would negotiate remuneration with the company.

After a long legal battle which began in 2008, the Constitutional Court ruled in 2016 that Vodacom was bound by the verbal agreement between Geissler and Makate. The court ordered Vodacom and Makate to begin negotiations on “reasonable compensation” for Makate.

“A black man’s invention is being taken for granted and South Africa needs to stand against it … What is wrong with a black man becoming a billionaire?” said Modise Setoaba of the Please Call Me Movement as he addressed the crowd.

He said the negotiation process should not have taken as long as three years.

“What is happening in this country is that a black man should stay poor … 18 years after his invention, so many millions have been benefited by Vodacom and yet they are not willing to give the inventor his dues,” said Setoaba.

Vodacom’s chair, CEO and seven of its 13 board members are black.

Setoaba said the Please Call Me service had also been launched in other countries like India, Columbia and Tanzania. According to Makate’s affidavit, Vodacom is estimated to have made about R63 billion from the call-back concept. But Vodacom told GroundUp the company “did not generate any direct revenue” from the service.

“Coming here today, I was hoping to see [CEO] Shameel Joosub and Makate walking out hand-in-hand having reached an agreement but instead I was met with SAPS and metro police guarding a private property,” said Setoaba.

A committee member from Please Call Me, Benson Motsumi, said the committee would make plans to shut down Vodacom because it missed the deadline and no one from the company came out to address the protestors.

He said this would include cancelling contracts, porting cell phone numbers and boycotting Vodacom.