Protesters attempt to shut down exams at Stellenbosch 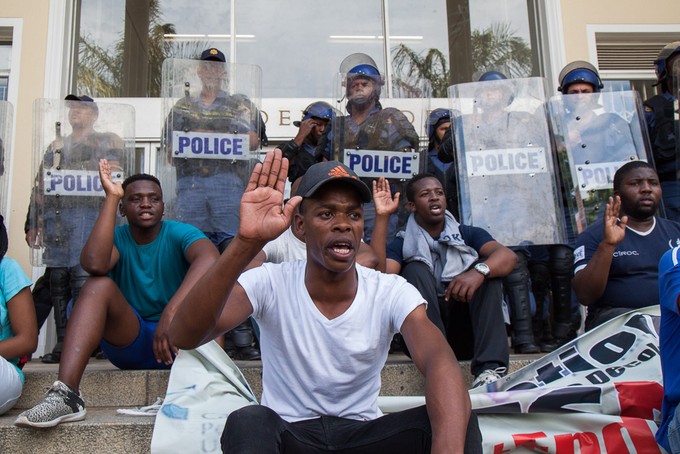 About 100 students attempted to disrupt exams and shut down Stellenbosch University on Wednesday but were met with opposition from about 30 police and private security officers.

The student protesters were scheduled to meet at 10:30am but did not mobilise until 12:30pm, when they marched to the G.G. Cillié building to enter and pull out students taking an exam.

But the protesters were stopped at the entrance by police and private security officers. Protesters briefly shouted at the officers and attempted to get through. One protester began to cry and shouted: “How do you sleep at night?”

When the officers refused to move, the protesters resorted to singing and demonstrating in front of the building.

Azania Tyhali, who appeared to be leading the protesting group, addressed the officers, asking them to let the students through in order to avoid the students using force to enter the building.

After about an hour, a cart of bread, butter, yoghurt and juice was brought to the protesters and the group ceased singing. When GroundUp left the scene at about 3pm, the protest had not recommenced.