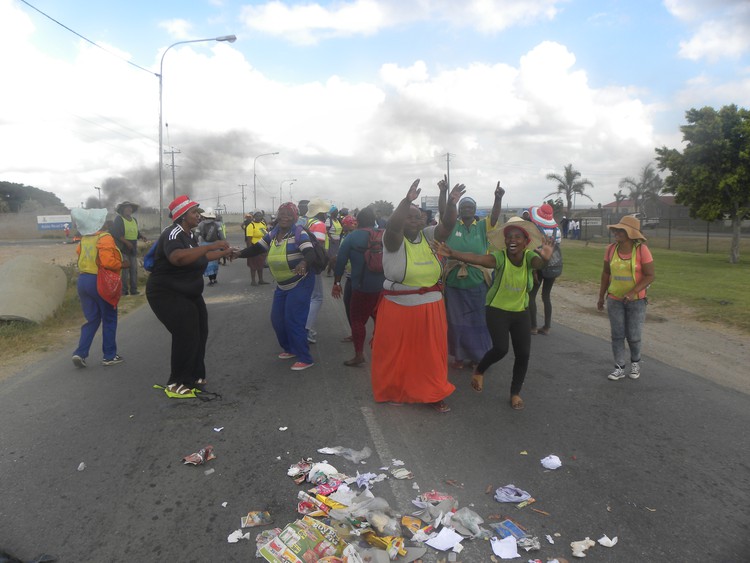 Expanded Public Works Programme workers protested at the weekend, saying they had not been paid for three months. Photo: Joseph Chirume

About 100 people working for the Expanded Public Works Programme in Port Elizabeth protested on Friday claiming that they had not been paid for three months. They blame the Nelson Mandela Bay Municipality for not communicating with them.

The employees, whose work is to pick up rubbish and clear illegal dumpsites in Motherwell, closed Addo Road with boulders and burning tyres, turning away motorists.

They briefly locked themselves in the municipal depot and refused entry to the premises. They said they would only go back to work after they had been paid their outstanding salaries.

Sandisiwe Ndala, who lives in Wells Estate, said she had started in November, cleaning the beach, and had then been transferred to Motherwell to clear dump sites, earning R100 a day. “We are working under difficult conditions because we don’t have protective clothing like safety shoes and overalls,” she said.

Sikelela Kama said she had not been paid. “I borrowed money for transport hoping that I will repay when I get paid. Now the money will accrue interest. All municipal workers have been paid except for us.” She said she had two children who did not have school shoes.

Nomathemba Twenani, who lives in Motherwell, said she was struggling to buy food for her eight children. “The idea of EPWP is good if it is done correctly. Some officials don’t tell the truth to us. We need an explanation why we have not been paid since last November. We worked wholeheartedly hoping that the municipality would pay us.”

Muncipality spokesperson, Mthubanzi Mniki put the blame on some of the workers, saying they were not coming to work regularly. Some had “absconded” and some were not working the full hours, he said.

But he said those to whom money was owed would be paid at the end of the month.