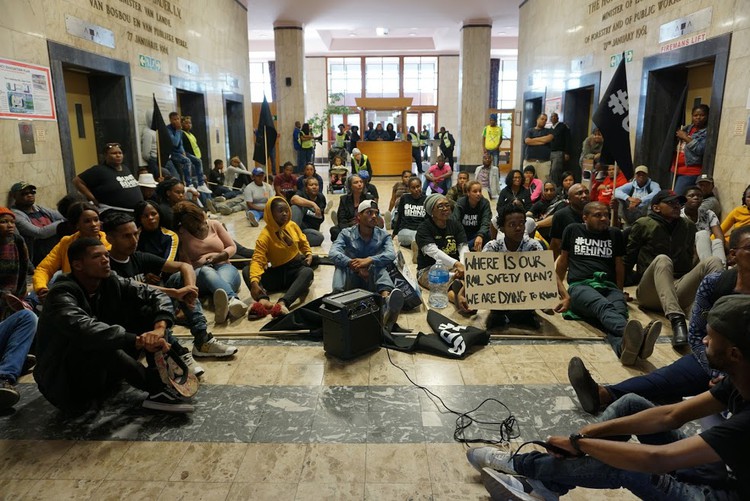 About 80 people occupied the ground floor of the PRASA Cape Town office at 11am on Wednesday. They were demanding that Minister of Transport Blade Nzimande fix the rail system.

The protest comes days after 17-year-old Simo Maninginingi Kwepe was killed on a Metrorail line near Salt River station on Friday.

Activist group #UniteBehind said they would hold a memorial service for Kwepe.

“It’s unacceptable that lives are being lost,” said #UniteBehind member Mandy-Lynne Mott. “Enough, PRASA. Enough of your corruption. Enough of completely ignoring the plight of people on the ground.”

#UniteBehind announced that its members will commence a hunger strike on 26 April, which also marks the 25th anniversary of the first democratic elections in 1994.

Activists did not allow him to address the crowd. “Mr Walker has made many promises to us, and he constantly talks about the new trains as if that’s going to be a miracle, but he has never spoken out about what is needed,” said Achmat. “We’re not going to give him the chance to address us. He is simply going to be a messenger today. We don’t want to hear from him today because he has no power.”

Walker is expected to pass the memorandum on to the PRASA Board, which has been an interim board for one year, extended for six-months by Nzimande on Thursday.

“People are angered, because people seek accountability from government officials,” said Karen Hendricks, a member of Reclaim the City and #UniteBehind. “The trains are public transport and so the public has got the right to know what the rail plan is for the next 20 to 30 years.”

“It’s frustrating that we have to come here and hold the government accountable, as if they don’t know their role,” said Nontsikelelo Dlulani, a member of Equal Education. “Our government needs to take us seriously as citizens of South Africa, especially the working class that are using trains because they are the most affordable [transport].”

#UniteBehind sent a letter to President Cyril Ramaphosa on 10 April and were promised a response by Tuesday (16 April), which was not received.

Rasool met some of the protesters, who had gone upstairs to wait at his office. He promised to escalate their letter to the president and said he is open to engaging further. He did not meet the majority of protesters downstairs.

People from a number of areas in Cape Town took part in the protest. Valentino de Klerk from Elsies River said he had missed his English matric exam due to a delayed train last year. He was not able to go to college this year because he could not graduate from high school having missed the English exam. He is taking the exam again in two months time.

Furnel Mayer said his younger brother had died seven years ago on a train. His family was returning by train from Muizenberg beach when some people tried to rob them, causing his brother to flee and fall between two carriages.