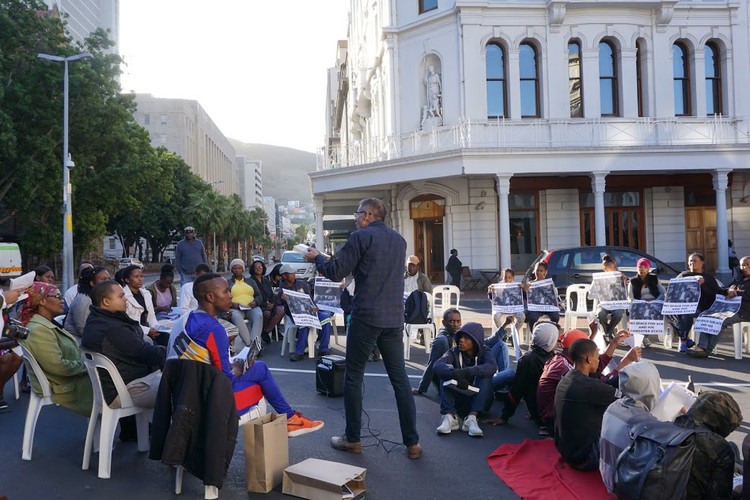 A crowd of about 80 people occupied the road in front of Iziko Slave Lodge in Adderley Street on Monday in solidarity with author Pieter-Louis Myburgh, following the disruption of the launch of his book, Gangster State, in Johannesburg.

Some protesters stood at the corner of Adderley and Darling Streets to block the traffic. Police were on the scene to redirect traffic.

Protesters chanted “Amandla Awethu!” (“Power to the People”) and sang “Ubumbano,” which (“Unity”). Some read excerpts from books that were banned during the apartheid era.

Protesters held posters proclaiming, “In Our Democracy, We Dare To Know” and “ANC Recall Ace Magashule.”

“When people start banning, and banning books, or don’t want others to read books, then we’re in trouble,” said Marcus Solomon, who was banned for five years by the apartheid government, to the crowd. “Especially when some of those books contain information that might tell us why we are in a country where there is still so much poverty.”

The Johannesburg incident was followed by the cancellation of the book launch at the Waterfront branch of Exclusive Books. The Free State ANC Youth League have also threatened to host a bonfire and destroy copies of the book.

The event was organised by civil society coalition #UniteBehind. Members of other organisations including Equal Education, Extinction Rebellion, and Reclaim the City also took part.

Equal Education facilitator Siyasanga Vilakati said, “I am here to try to put a stop to corruption … raising my voice as a citizen of South Africa to say that we know what you’re trying to hide.”