Over 400 mourners were stopped on their way to Matanzima Cemetery, Uitenhage 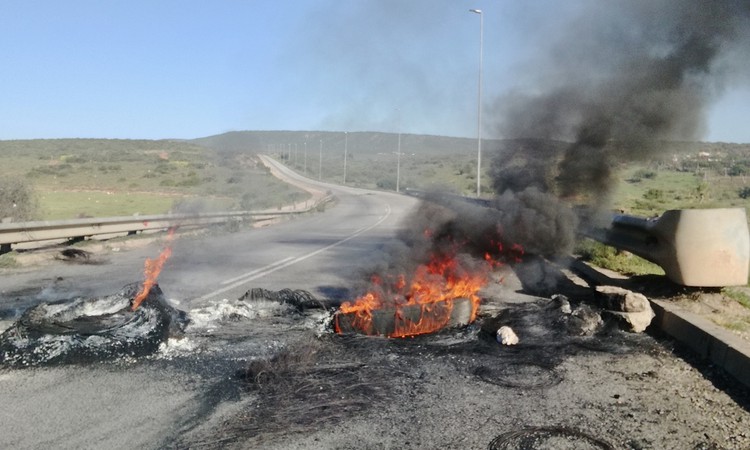 The road to Matanzima Cemetery, Uitenhage, was blocked by protesters on Thursday. Photo: Thamsanqa Mbovane

Residents of Peace Village in KwaNobuhle, Uitenhage, have made good on their threat to disrupt funeral processions until the paving of Siwani Street is complete. Residents are protesting because the R1.2 million project ground to a halt in October 2019.

Over 400 mourners were stopped from using Matanzima Road on Thursday afternoon, as about 100 protesters blocked it with rubble. A pall of black smoke hovered over the normally busy road, which leads to Matanzima Cemetery.

This protest tactic has worked previously – in 2018 when 20 families wanted RDP houses.

Mourners had to go via Rocklands Road in Gunguluza.

Protesters blew whistles in a show of force.

“They don’t have ubuntu,” said a mourner attending the funeral of Ntombizodwa Qukubana, the mother of ward 46 Councillor Lindelwa Qukubana (ANC).

“They (protesters) must remember they also have families,” said the councillor.

Protest leader Thembinkosi Noyila said: “There is no turning back and we will protest until they pave Siwani Street.”

MMC for Infrastructure and Engineering Andile Lungisa, who was also attending Qukubana’s funeral, condemned the disruption. “People must use proper channels as we always listen when they communicate with us … Burning doesn’t help anyone,” he said.