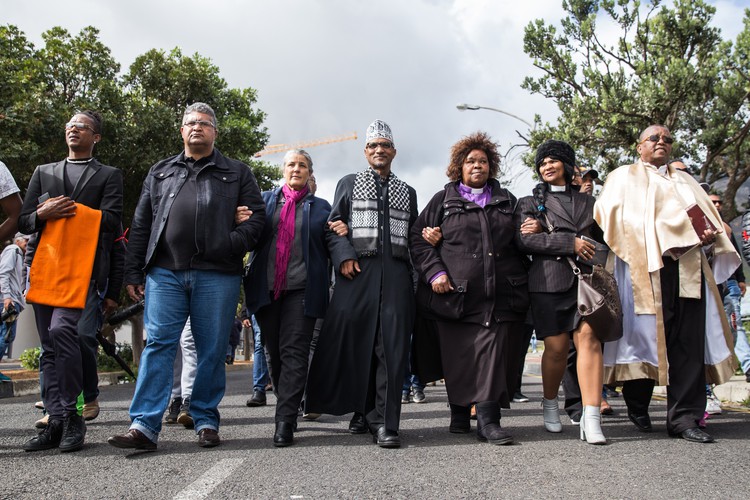 About 40 people marched in the Cape Town city centre calling for peace and an end to gangsterism, violence, drugs and farm killings. Photo: Ashraf Hendricks

About 40 people marched in the Cape Town city centre calling for peace and an end to gangsterism, violence, drugs and farm killings on Tuesday.

Chanting: “Enough is enough”, “Stop the bloodshed” and “Let us become a united voice”, protesters took memorandums to the Provincial Legislature and to Parliament.

They are demanding a “Western Cape Crime Summit” with communities and government officials, including the ministers of police, social development and education.

The memorandum said that if this meeting does not take place within the next two weeks “a national protest and a possible tax revolt” could happen.

“Last night we had a shootout for about two hours,” said Donay Maarman, a 16-year-old student from Parkwood.

Maarman said that the gangsters are putting everyone’s lives in danger and because of fear, the community is too scared to rat them out. She said that government and police need to intervene more.

The march was organised by We 4 Us South Africa, a collective of civil organisations, religious leaders, residents and parents.

Alecia Dupreez, committee secretary of We 4 Us, lives in Mitchells Plain with her six-year-old granddaughter. She said, “I lie awake at night and listen to the bullets going around.”

Her home is next to a park, but because of the shootings she sometimes can’t allow her grandchild to play outside. Dupreez said that it’s tough watching her grandchild grow up in such a dangerous community.

“We are being held hostage within our own communities,” said Dupreez. She said there are gangs at schools and when youngsters do not want to join “they get stabbed“.

Since November 2018, over 2,300 people have been murdered in the Western Cape. In July, the South African National Defence Force was deployed to assist police.

“We have to mobilise again. The army did nothing,” said Shamiela Edwards, a community leader from Manenberg. Edwards said that communities need to “stand up and take action” and hold government accountable for the deaths.

Western Cape Provincial Minister of Community Safety Albert Fritz said that he welcomed the march and the initiative.

Outside Parliament the memorandum was received by Cassel Mathale, Deputy Minister of Police. Mathale said that visiting communities was part of government’s program. He said that protesters should march unapologetically, but he told the demostrators: “Never take the law into your own hands”.