DUT says they will meet with community members on Thursday 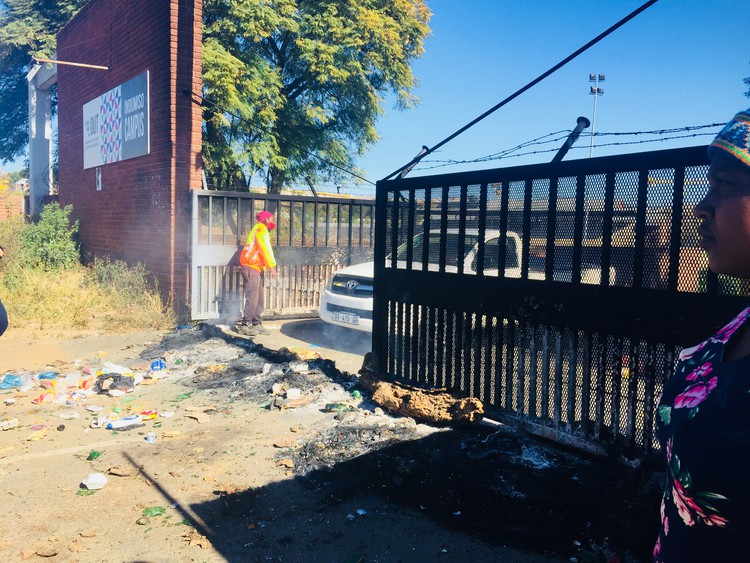 Protesters used burning tyres and broken bottles to block the entrance to the Durban University of Technology Indumiso campus in Imbali, Pietermaritzburg, to demand that they benefit from tenders. Photo: Nompendulo Ngubane

Community members blocked the gates of Durban University of Technology (DUT) Indumiso campus in Imbali, Pietermaritzburg, on Tuesday, demanding that they benefit from tenders awarded by the institution.

Protesters used burning tyres and broken bottles. Only cars leaving the institution were allowed to pass. Among the group were subcontractors employed by Temi Construction. Others were unemployed residents who identified themselves as parents of students enrolled at the institution.

Temi Construction is currently building classrooms and a lecture hall at the Indumiso campus. The construction project started in December 2019 but ground to a halt at the start of lockdown in March 2020.

Sibongiseni Ndlovu, community liaison officer for the Temi project, said, “There was an agreement that the company would take 70% of their skilled workers and the other 30% would come from the community. This promise has been broken.”

He said the company had instead hired workers without the community’s approval. “We were not told anything. The reason we have blocked everything is to get clarity. We have discovered that the people employed are from other cities, such as Durban,” said Ndlovu.

He said residents were also excluded from the bidding process for tenders. “Again this institution hires companies from other provinces. Companies that are not from here are given tenders. We have a lot of young people who own small companies. They can do the work. The institution is located in Imbali. The locals must benefit,” said Ndlovu.

Community member Xoli Zungu said, “We are unemployed. The institution has a lot of work they can offer us. It’s true that not all of us are qualified for certain jobs but they can hire us as cleaners. They take people from Durban, what about us? … We are supporting the institution by letting our children and relatives study here. They must give us employment.”

Following questions sent to Temi and DUT, Dr Joseph Molete, the centre director in Midlands, told GroundUp that they were aware of the protest on Tuesday morning and were grateful that the police responded to calm the situation.

“We had a meeting with the ward 19 community forum leaders last week and had all agreed to schedule another meeting with more stakeholders, to engage on their concerns. Their squabbles were more between the community and the contractor. All stakeholders need to meet and propose a permanent solution,” he said.

Molete said a meeting with ward 19 residents has been scheduled for Thursday. He did not comment on whether Temi had reneged on an agreement to hire unemployed youths from the community.