Call for JSE to act on climate change 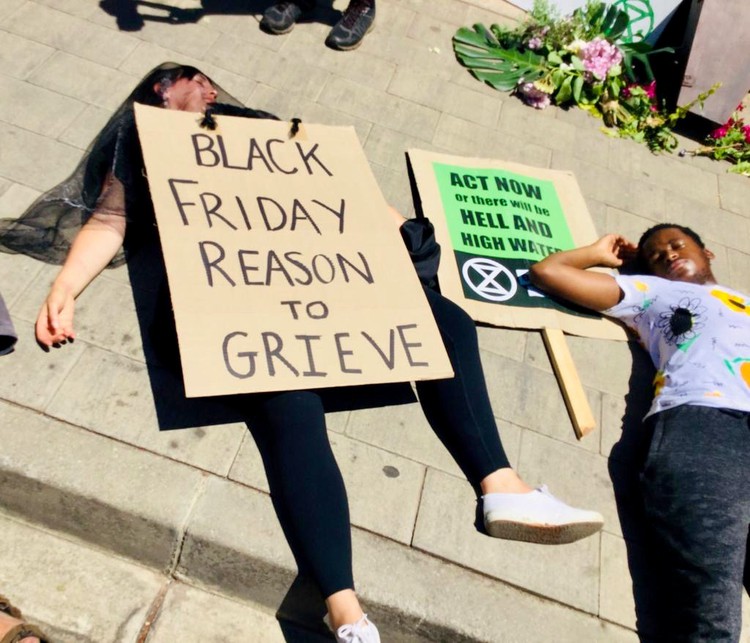 Protesters from Extinction Rebellion, Fridays for Future, and members of communities affected protest outside the Johannesburg Stock Exchange in Sandton. Photo: Kimberly Mutandiro

About 50 protesters from Extinction Rebellion, Fridays for Future, and members of mining affected communities — many from Soweto — protested outside the Johannesburg Stock Exchange (JSE) in Sandton on Black Friday.

They called on companies to take urgent action over climate change.

They want government to move the economy away from carbon, halt biodiversity loss and reduce greenhouse gas emissions to net-zero by 2025.

“If the climate change crisis is not addressed there won’t be a future,” said protester Sunny Morgan.

Protesters danced and performed poetry. They brought a coffin with a list of grievances inside it to be addressed by the JSE. They want the JSE to sponsor the use of solar energy in communities and cut the use of fossil fuel. They demanded that South African investors, asset managers and financiers divest from fossil fuel assets; that JSE companies devise and disclose carbon reduction plans, climate risk and resilience strategies; and that banks and financiers disclose their lending exposure to carbon intensive projects and businesses.

Black said that the effects of climate change are being seen with high droughts levels, “severe water insecurity” and “reduced crop production”. “As young people we are panicking about our future.”

According to Extinction Rebellion, “Continual pursuit of carbon-based economy is criminal. To fail to take action in light of the climate change emergency is immoral.”

The JSE has been approached for comment and this article will be updated once received.