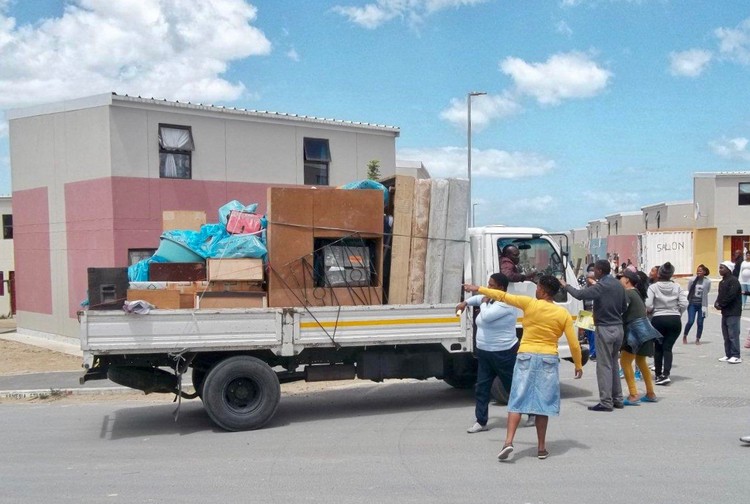 “Hamba!” angry housing beneficiaries, who have title deeds but no houses yet, shouted at new arrivals trying to move in to Forest Village. Photo: Vincent Lali

When new housing beneficiaries arrived to move into their homes in Forest Village on Tuesday, protesters tried to stop them.

The protesters were dozens of housing beneficiaries who say they are frustrated with the Western Cape Department of Human Settlements for long delays in the handover of finished RDP houses in Forest Village, Eerste River. They are also objecting to the home allocation process.

They sang struggle songs and waved placards that read: “We want our houses” and “We are sick and tired of waiting.”

Xoliswa Mtwebana said she received an SMS in 2013 inviting her to a community meeting at Hillcrest Community Hall, where officials asked her to produce her birth certificate, ID and a SA Social Security Agency (SASSA) letter confirming that she lived on a government grant. Then last year, Mzi Development, a contractor responsible for facilitating administration for beneficiaries, asked her and other housing beneficiaries to sign deeds of sale, she said.

“I have been clutching the deed of sale and waiting to be allocated a house since last year,” she said.

Mtwebana said she is using her disability grant to rent a leaking backyard shack for R600 a month in Elsies Rivier, where she lives with her grandchildren.

Liziwe Stofile said she has been using her social grant for two years to rent a backyard shack for R500 a month in Elsies River. She shares her one-room shack with seven grandchildren, two of whom share a bed with her and five of whom sleep on the floor.

“I’m 57 and without a house, but they allocate houses to 16-year-olds in Forest Village. I want my own house now,” she said.

The housing beneficiaries had been receiving deeds since 2016, he said.

Fritz lambasted the Western Cape Department of Human Settlements for moving new housing beneficiaries into houses without checking with him first. “They used to give us a list and we verify that they are our own people. We have not received the list,” said Fritz.

He said: “We ask why they are using different criteria. They are giving houses to people who are less than 18 … People point fingers at us and say we are corrupt.”

The Forest Village steering committee has asked officials to explain to residents how it allocates the houses as the “situation had reached boiling point” said Fritz.

Fritz said he and the steering committee handed a memo of grievances to the department in September. It asks the department to explain the housing allocation criteria it used.

After the meeting with Fritz, the irate housing beneficiaries marched to Forest Village. They shouted: “Hamba! (Go!)” at new arrivals who had two trucks loaded with their belongings. The protesters refused to allow the new beneficiaries to move into their houses in Forest Village.

Nomzamo Stofile, a member of Forest Village steering committee, said: “We are stopping them from moving in because we have noticed that the government is not allocating houses according to the list. We also want to move in.”

Nkokheli Ncambele, also on the committee, said a senior official had promised that the department would allocate houses to 111 residents from Mfuleni and Eerste River before the end of June 2019.

“We asked the department to stop allocating houses to people until the issue of the 111 housing beneficiaries and others who already have deeds of sale is resolved,” he said.

Committee member Avril Thompson said, “Before the new arrivals move in, we want to know if they are on the housing database and if they have been screened.”

Nceba Mxathule, from the Western Cape Department of Human Settlements, begged the protesters to allow the new arrivals to occupy the houses. “They have already taken down their structures in Gugulethu. Where will they stay? he asked.

Mxathule said the department was relocating shack dwellers to Forest Village to make way for the construction of houses in Gugulethu.

Ncambele said the beneficiaries who had already arrived in two trucks would be allowed to move in.

Muneera Allie, a spokesperson for the Western Cape Department of Human Settlements, said, “Forest Village is a key allocation area for beneficiaries from N2Gateway and the Southern Corridor.”

She said the department had met the residents to discuss their complaints about the Forest Village Housing Project.

“It was agreed that there will be a workshop to provide more information,” said Allie.

She said there were delays in allocating houses because “the department moves beneficiaries into homes in phases, and as and when they are available”.